This was the day for my annual car service, so our Dine and Divine destination needed to be somewhere east of Southampton not too far from the Agency. We were given an impressive newish Hybrid SUV courtesy car – quite a clever move as by the end of the day I was wondering if this might be the time for a change of vehicle!
It took about 40 minutes of driving along rural byroads before arriving in Selborne passing through just one significant settlement on the way, the medieval market town of Bishop’s Waltham.
Selborne is a much visited village due to the presence of the Gilbert White House and museum so parking was at a premium and I was glad that BQ had brought his disabled badge enabling us to park right opposite St. Mary’s Church. It was an interesting if unremarkable church visit enlivened by a jolly group of holiday makers visiting at the same time. The sun shone just long enough to get the drone deployed before we made our way a couple of hundred yards down the Main Street for our lunch at the Selborne Arms Hotel.
We couldn’t leave the village without a visit to The Wakes, Gilbert White’s house , which is now a museum dedicated to his life and also to the life of Lawrence ‘Titus’ Oates, best known for his courageous act of self-sacrifice on the 1912 Antarctic expedition.
But I have to say I found the 32 acres of the gardens rather more interesting , particularly as for the past 20 years they have gradually been restored back to Gilbert White’s original 18th century design.   MW

The Great Yew of Selborne was perhaps better known than the church. Estimated to be 1400 years old, its height exceeded that of the adjacent tower and its girth was estimated at 26 feet. Sadly it’s demise came during a big storm on 25 January, 1990 and although it’s trunk was replanted no new growth regenerated.  However a cutting taken from the fallen tree is thriving in the churchyard

At the end of the 19th century there were three pubs in Selborne or one for every 185 persons, including children and under legislation of the time it was deemed to be ‘congested’ .  The village policeman was sent to spy on all three establishments to help magistrates decide which should be closed.  The Selborne Arms passed muster ‘despite having a rear access that could facilitate after hours drinking’, but he reported that the ‘White Hart’  was used ‘by less respectable members of the working class including well known poachers’.  It was duly closed.

Now, the only surviving pub is the Selborne Arms. Dating from around 1600 the building has been altered and extended many times. It has witnessed gentrification, geriatrication and barbourisation, but has escaped the worst fate of all – keg beer. 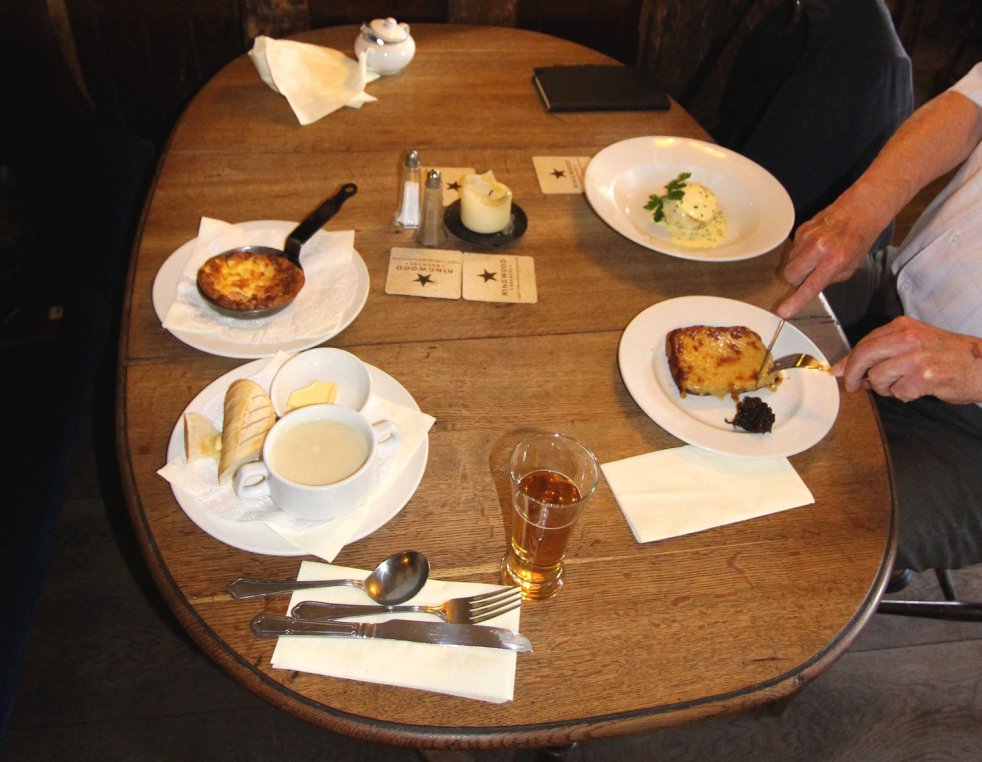 There will never be another yew”

I wish it was original but I cannot lie, a tripper standing before the stump of the famous tree uttered it within our hearing. MW with the speed of a man who can recognise manna when it drops from heaven, alerted me to my headline so here it is.
The approach to the church from the village is dominated by a magnificent spreading oak, which offered welcome shade on a glorious hot day, but unfortunately here was a lovely village yet again suffering from constant traffic, no pedestrian crossing and impossibly narrow pavements. The trip to the pub was not without alarms.
The Selborne Arms was all that a village pub should be plus a little bit more, as the menu was so diverse that we both took the option of two tasty starters which did not disappoint.
Then, well refreshed, it was a short stroll to Gilbert White’s house and more importantly the garden where he wrote his classic:- “The Natural History Of Selborne”, which according to my old orange Penguin copy, is the fourth most published book in the English language, even surpassing “Fifty Shades Of Grey”!
In my youth I had always been told he researched the contents of his treatise in his back garden, and it was with some surprise having passed through the house that I found this extended to total 32 acres of glorious countryside.
The trip rekindled my interest in the book and, re-reading it after forty years, I finally have discovered a masterpiece.   BQ