Our visit to St Cross Church was an unexpected pleasure, not least of all because it was unplanned.  We had travelled to Winchester to visit the smallest church in Hampshire and finished up in one of the largest.   Our intended destination was to have been St Swithun-upon-Kingsgate, a tiny medieval church built within the fabric of the city walls above the archway of Kingsgate, the principal entrance into the city.  However when we arrived we were met with a mass of scaffolding and builders vehicles and so we retired to a nearby bar where, over cups of coffee, we re-planned the day.  The Norman Church of St. Cross was the obvious alternative, being just a few hundred yards away.  It turned out to be an excellent choice, awe inspiring in its scale, with a unique history.

On our arrival we were surprised to find that there was an entrance fee, certainly a first for Dine and Divine.  Later we discovered that, as travellers, we were entitled to claim a Wayfarer’s Dole – a morsel of bread and a horn of beer, but more about this later.

Construction of St Cross began in 1135 and was finally completed in 1295, a 160 year timescale during which the predominant architectural style changed from Norman to Transitional and finally to Early English or Gothic.  The walls are over 1 metre thick and are of stone brought in from Caen in France, Dorset and the Isle of Wight.  Originally thatched, the church acquired a lead roof in the mid 14th century.

The nave was the last part of the church to be built but, due to financial disputes, never reached the length originally intended. The resulting shortness adds to the sense of loftiness.  The encaustic floor tiles are quite beautiful and date from 1390.

The chancel was the first part of the church to be built, typically Norman with the round-headed windows and extensive chevron ornament. The altar stone spent several hundred years buried beneath the altar and was only restored to its former position in 1928. It is thought that the church had been warned in advance that Cromwell’s Puritans were planning a visit and had enough time to save the stone by burying it.

The Lady Chapel is, in my opinion, the most beautiful corner of the church with its exquisite carved stonework.  The triptych is Flemish and the chair on the left is brought out and used for the gowning ceremony of a brother. 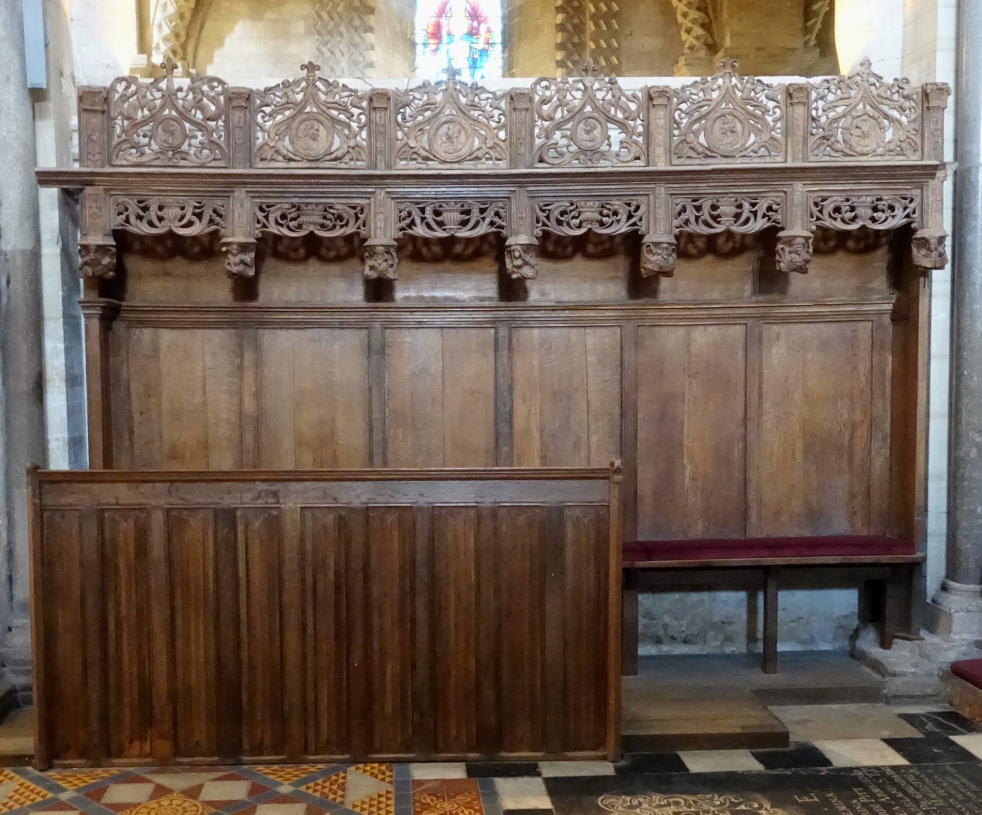 This ornate wood carving was originally installed in the Bishop’s Palace at Wolvesey.  However, one of the carved heads depicts Queen Anne Boleyn.  When the bishop learned that Henry VIII was due to pay him a visit shortly after having Anne beheaded, the bishop had the carving moved into St Cross in order to avoid incurring royal displeasure. 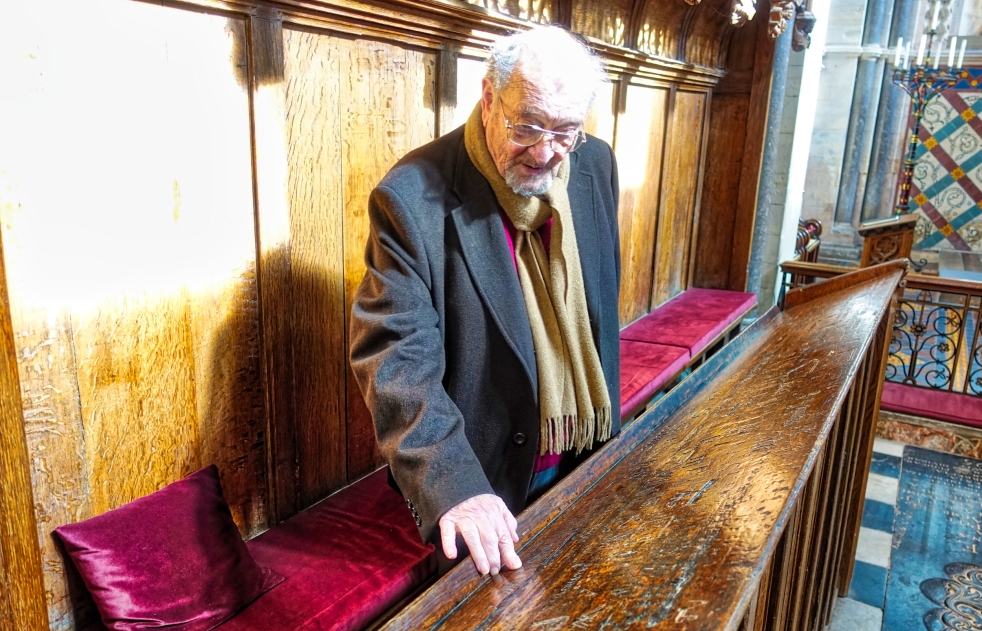 BQ studies the graffiti carved into the choir stalls by generations of choirboys over many centuries.  Despite the vandalism one can’t help admiring the quality of the calligraphy.

The re-cycled font came from the nearby demolished church of St Faith and dates from the 1100’s.  The base is 17th century.

The Hospital of St Cross

St Cross Church is just part of the Hospital of St Cross which was founded in 1132. It is England’s oldest charitable institution. Though not a hospital in the modern sense of the word, it was established to support thirteen poor men so frail they were unable to work, and to feed one hundred men at the gates each day. The thirteen men became known as the Brothers of St Cross and wore a black robe, a black trencher hat and a silver badge in the shape of the cross of Jerusalem.

The hospital’s foundation is reputed to have been inspired during a walk through the Itchen meadows taken by Henry of Blois, Bishop of Winchester and grandson of William the Conqueror. He was supposedly stopped by a young peasant girl who begged Henry to help her people, who were starving because of the civil war. The parallel with the Virgin Mary was not lost on Henry, who was so moved by the girl’s plight that when, a little further along the river, he discovered the ruins of a religious house, he resolved to use the site to establish a new community to help the poor.

The hospital was extended in 1445 by Cardinal Henry Beaufort who founded the Order of Noble Poverty.  These brothers, 25 in number, wore claret instead of black  and were accommodated in the long terrace almshouse that was added to the existing hospital buildings giving St Cross the look that we see today.

Surprisingly these ancient arrangements continue to the present, the two orders are known as either Black Brothers or Red Brothers.  They must be single, widowed or divorced, and over 60 years of age. Preference is given to those in most need. They are expected to wear their robes and attend daily morning prayers in the Church. We noticed several brothers during our visit.

Also surviving to the present day is the ancient tradition of the ‘Wayfarer’s Dole’, which consists of a small horn cup of ale and a piece of bread. Any genuine traveller passing by can still freely claim the ‘dole’ at the porters lodge. I wish we had known at the time!

This tradition gained wide publicity around a hundred years ago resulting in a variety of postcards being published depicting dole recipients.  It appears to me that the brother offering the refreshment looks decidedly unsympathetic. 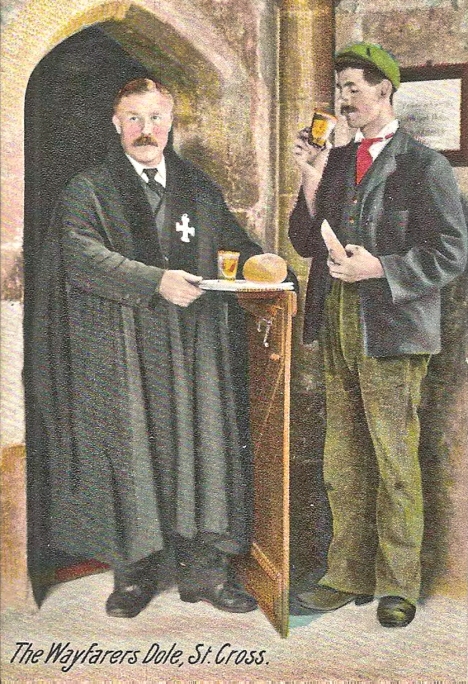 Since 1755, when it was a coaching Inn, there has been a pub on this site catering to the needs of travellers moving to and from the coast.  Lord Nelson himself is said to have stayed here on his way to Portsmouth.  The Wykeham Arms encapsulates all the eccentricities of Winchester under one roof with its extensive collection of pewter and silver tankards covering the walls and ceiling.

Many of the tables were, in a previous life, school desks at the nearby prestigious Winchester School. Considering this has always been one of the most expensive fee paying schools in the land, the quality of the students graffiti compares unfavourably with the lowly choirboys just down the road.

Unfortunately I was quite disappointed with the Wyk Pie which was oily.  I have had it once before on a previous visit and it had been excellent, living up to its reputation of being the traditional choice and firm favourite of Winchester School pupils when being treated by parents as they were being returned for the beginning of another term.

I couldn’t help noticing the hat box next to our table. It looked the perfect shape to accommodate the hat that one sees on portraits of Lord Nelson and I idly wondered if he might have left it at the inn as he hurried to Portsmouth in 1805 to take command of HMS Victory ready to face the might of the Spanish Armada. In view of the outcome, one can understand why he would never have come back to claim it!

The first impression on entering St Cross church was one of warmth after struggling through the snow in a bitter wind as, miraculously, the heating was on.

After entering the building, the progression down the nave toward the high altar was a history lesson in itself, as the architecture changed from early Gothic to late Romanesque in a gentle and logical progression without destroying the beautiful unity of the whole.   The interior hangs together in breathtaking consistency despite the passage of centuries of discreet changing styles.

The slightly pointed arches gently give way to rounded arches with spectacular chevron zigzag decorations. These decorations reached their perfect culmination in the Lady Chapel which, in this vast structure, was intimate and perfect for private prayer. A light signified that the blessed sacrament was reserved here.   In comparison with the nearby Winchester Cathedral the memorials in St Cross are at a minimum so nothing detracts from the symmetry of the whole structure.

I was reminded of the period when I lived in Durham City overlooking the greatest Norman structure in the country, namely Durham cathedral. I became fascinated with its architecture and St Cross church was almost like a scaled down version of that icon.

Set alongside the river in the water meadows under St Catherine’s hill the situation is idyllic, and over the centuries has resisted the urban sprawl of a busy commuter town.

In our younger days MW and I would have walked along the river to our lunch destination, the quirky and much loved Wykeham Arms, for although MW can still manage it, regretfully I no longer can. Often voted the national pub of the year it has an awesome record to live up to and by the time we arrived its regulars were well ensconced in the well graffitied school desks which doubled for tables

Having found a spare table it was only when my canine friends arrived that I discovered a dog bowl beneath my chair.   MW, knowing of my aversion to any dog, collapsed with laughter.  However, I am happy to say that all of the animals behaved impeccably.

In such pubby surroundings MW had a half pint of beer instead of his usual glass of wine.  My meal was variable, with a fine and original soup to begin, which the charming waitress advised me was vegan, (perhaps things in this direction are not as ghastly as I have always imagined).  My fish however, was disappointing, but I have never been a great fan of hake (the cod was off).