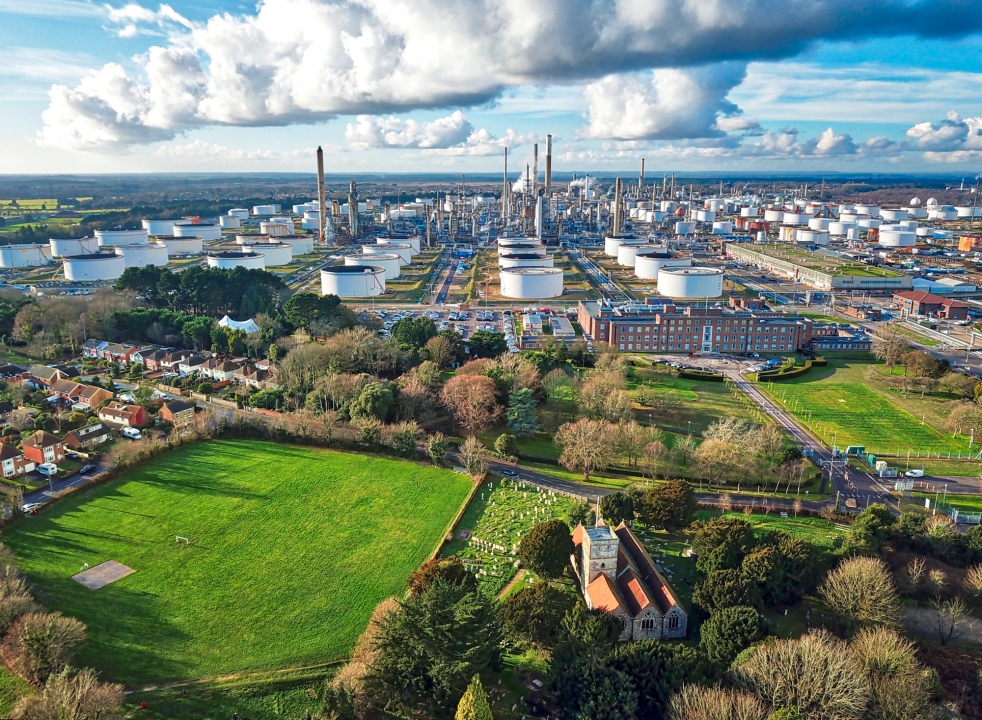 The Parish Church of All Saints in Fawley has hardly changed during the past 700 years, but in this view it looks quite incongruous against the alien backdrop of the largest oil refinery in Europe.

As we stood in the churchyard there was no sign of the huge installation although the throb of heavy machinery  was a constant reminder of its presence.  What a contrast as we entered into the silence of the church, which was warm and welcoming and clearly a much loved community centre as well as a place of worship.  We had not been there long when, as arranged, we were joined by one of the churchwardens, Margaret Richards.    Charming and knowledgeable, she made our visit a real pleasure and we are indeed indebted to her for the help and guidance she gave us

Essentially the present building consists of a 12th century chancel and nave flanked to the north and to the south by 14th century aisles.  Little has survived from the church’s Saxon origins apart from one small window or squint, that has been re-positioned to a point opposite the chancel on the exterior east wall.

The interior of the church is bright and cheerful with modern seating which replaced pews which, together with the wooden floor, had been removed in 1988 after dry rot had been discovered.  The flooring was replaced by Purbeck stone tiles which perfectly match the rest of the building.

In the mid nineteenth century the interior must have looked quite different with a much higher ceiling as a detailed description from the period states;  “The church was a most remarkable specimen of pewing.  There were five galleries, two at the west end reached by different staircases and quite separate. One was for the orchestra (bass, viola, flute etc.), the other for men. On the south side was the Eaglehurst pew and the old Lord Cavan requested the vicar, Lord Walsingham, to have one of the pillars in the nave cut away because it interfered with his view of the pulpit.  Happily Lord Walsingham declined.  On the north side were two further galleries, the one to the west end for men and women, the other simply a pew belonging to one of the farms, so placed that the occupant could, if he pleased, read the sermon for himself if it were legibly written”.

On 23rd November, 1940 the chancel and north chapel were severely damaged  during an enemy air-raid.  A high explosive bomb fell through the roof and exploded slightly north of the centre of the chancel leaving a crater in the floor eight feet deep and 20 ft across.  The chancel roof was completely destroyed but the solid Norman walls held firm, a testament to the skill of the original stone masons. Sadly the 14th century stained glass in the south chapel was shattered but miraculously, the window in the north chapel dedicated to those who fell in the First World War, was undamaged.

The cost of restoration was met by the War Damage Commission together with £2,000 raised by the parishioners plus a gift of £5,000 from the Esso Petroleum Company, owners of the refinery – presumably the intended target of the bomb.

The church was rededicated on the 12th September, 1954 by the Bishop of Winchester.

The pulpit is a beautiful piece of Jacobean work (early 17th century). Originally this was a three decker pulpit, but it now lacks the lower reading desk, the place for the Parish Clerk ‘to keep the congregation in order’.  In the background is the relatively modern font thought to date from the mid 19th century. 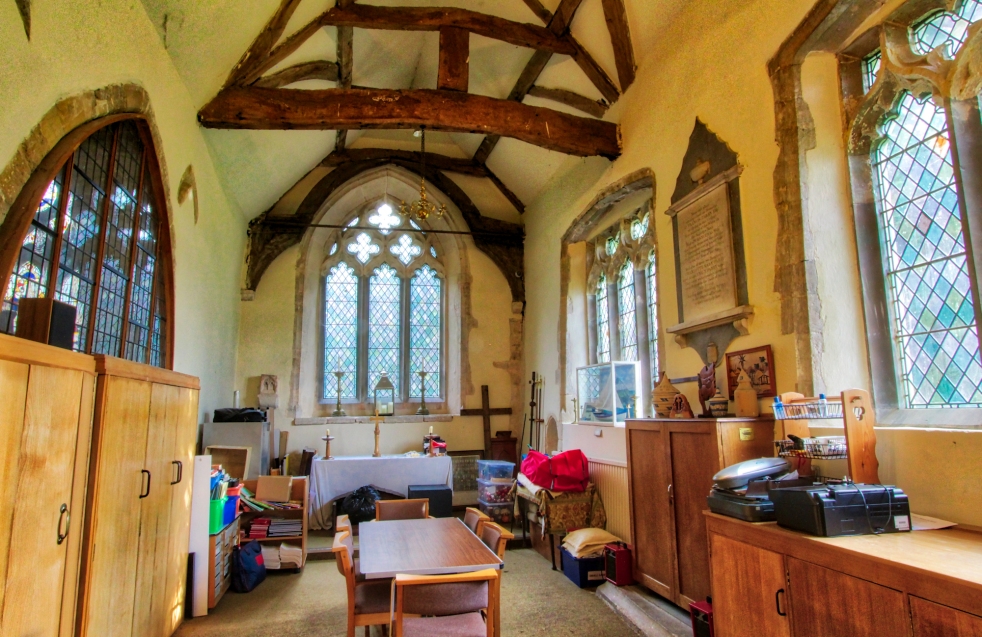 The South Chapel dates from around 1330.  It is now used as a vestry and has a number of interesting items of memorabilia on display, including part of the 1940 bomb and items donated by the church’s Link Parish of Mukono in Rwanda. 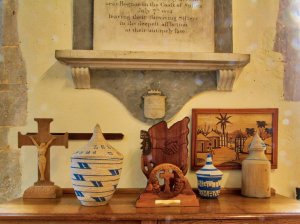 But the most interesting and unlikely item on display is a simple model boat in a glass case.  It has an fascinating story;

On the morning of the 9th October 1961 the village gong – an old shell case left by the Royal Navy – was urgently sounded in the most remote community in the world. The village was situated 6,100 miles away on the volcanic island of Tristan da Cuhna, and the urgent warning was to let the 268 inhabitants know that it was time to abandon the only home they had ever known. For two months they had been shaken by a series of tremors that had increased in severity until finally a huge shock, the immediate prelude to a devastating eruption, brought down the cliff face behind their settlement. The British government who were responsible for the island made the decision that the whole population must be evacuated and eventually they were all re-housed in the married quarters of a recently decommissioned RAF camp close to Fawley.
It would be 18 months before the eruption subsided and during that time the islanders were welcomed into the congregation of All Saints Church. The men were found jobs and the women mostly stayed at home. Before their exile, the islanders had never seen a television, car, telephone; supermarket or even a policeman and the government assumed that after tasting the pleasures of a consumer society they would wish to remain in the UK. This would have been a welcome development as the government would have been relieved of the responsibility of maintaining the island. There were even plans considered to then use Tristan da Cunha for atomic bomb testing.
A referendum among the group was arranged but to everyone’s astonishment, the overwhelming majority voted to return home which they did, departing on the RMS Amazon on 17th March, 1963 taking with them four Englishmen that had married Tristan da Cunha girls. Before they left they made a donation to the church that had welcomed them – a wonderfully evocative model of a traditional island longboat similar to the ones they had used to make their escape from the island on that fateful morning. 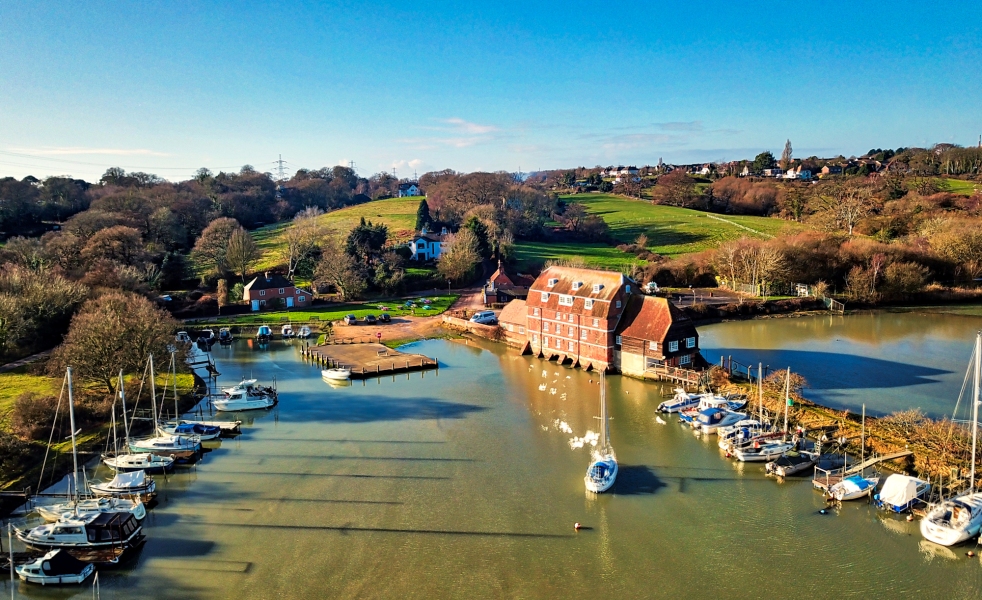 The small hamlet of Ashlett Creek, now sandwiched between the refinery and a power station, is a reminder of what small settlements along Southampton Water must have looked like in the 19th century.  The large building, which dominates the creek, is an 1820 tide mill, the final mill in a series that were built over the centuries in this position.

The pub is adjacent to the tide mill,  just a short distance from Fawley.   BQ and I have occasionally dined there during the past twenty years and it is fair to say it has had its ups and downs, but it is the only dining option in the vicinity and it does have a great location.   I had dropped in earlier in the week to check when the restaurant would be open and as I entered the building it had been necessary to run the gauntlet by walking through the public bar in which there were almost as many dogs as humans.  As I passed through, the animals all strained on their leashes vying to be first to give the newcomer a good sniffing.  So when BQ and I returned on the following Saturday for our lunch, knowing BQ’s attitude to dogs, I let him enter first expecting some noisy entertainment, but alas, on this occasion, the bar was canine free.

This was definitely not the most healthy of meals we have had. All of the items in the main course had been immersed in a deep fat fryer, but I have to confess it all tasted very good, cooked to perfection with a tasty spicy seasoning.

Oil and religion – the cause of most conflicts in my lifetime; but one has been there for 1000 years the other for under a century and I’m willing to bet only one will be there in 50 years time as the world struggles to free itself from its dependence on oil.

Mind you the church only continues to flourish by intelligent use of its space for other purposes such as community events and even concerts, indeed the next event was a performance by an R.E.M. tribute band.   Whilst berating my son about tribute bands recently, he asked me what was the difference to me listening to a Mozart symphony?   As usual I had no answer to that one!

Arriving first, I spent a half hour on my own enjoying the warm atmosphere and the comforting shape and variety of styles in the structure.  It was possible to trace the history of the building throughout the past millennium, which I found very satisfying.  I could find no surviving Saxon remains, but did admire the Norman pillars with their fine capitals topped by early English arches.  The restoration of the bombed area was finished to a high standard by first rate craftsmen. As with so many churches these days, the pews had been removed and replaced by modern seats which gives more flexibility to arrange the ever necessary money raising activities.

Yet again however, I gained much succour from the presence of a communion light, albeit electronic, as my appointment with my canine friends awaited in the Jolly Sailor.  MW had been at pains to make me aware of the gauntlet I was about to run in the bar.  However my prayers were answered as not one animal was visible!

I did, however have my revenge when, in the pub, he committed the error of ordering a glass of Shiraz that had obviously been in an opened bottle for some considerable time.  The look of disgust on his face was worth all the apprehension I had suffered and furthermore, my Ringwood best bitter was perfect.  But, in the manner of true fellowship, we did elect to share a plate of deep fried heaven and to hell with the  consequences which, for me, usually involves a packet of Rennies.  It was delicious!!