BQ loves browsing in charity shops, whether its searching for obscure vinyl records or unusual books, he has a keen eye for a bargain.  But recently he showed me a new acquisition, a second hand book entitled England’s Thousand Best Churches for which he had paid the princely sum of £2.  It is written in an informative and entertaining style and I had to concede it is an excellent addition to the reference books that we already use.  Best of all it included a description of a church that neither of us had heard of, despite being relatively close by.

It was The Church of St. Hubert and the visit turned out to be one of the most moving experiences of all our visits so far.  It is a very simple church of great age sitting in the middle of a field seemingly rather sad having survived all manner of turbulent events in its 1,000 year history from which it has emerged relatively unscathed. But it had a haunting aura that is difficult to describe, but has nevertheless lingered in the memory.  MW

For over 150 years the sight of this pretty little chapel standing in the middle of a field will have been a familiar one to railway passengers speeding between London and Portsmouth.  Many will have wondered just why it stands in such splendid isolation and what had become of the community that it had once served.  They would be right to wonder because it was not always so alone.

When Idsworth Church was constructed in 1053 it was at the centre of a small village that once occupied the field that we see surrounding the church today.  For over 300 years it served generations of villagers until the disastrous year of 1348.  A long forgotten small port in Hampshire has the dubious honour of being the probable point of entry for the Black Death in that fateful summer.  This merciless plague killed between 30 – 50% of the country’s total population, but it was particularly devastating for the small closely knit villages of Hampshire.  After the plague had swept through Idsworth, the village was abandoned and after several centuries all traces of it had disappeared – buried under the plough.

It would be over 200 years before the church once more rang to the sound of communal singing.  In the late 16th century Idsworth House, a grand Elizabethan courtyard manor, was erected just where a collection of buildings can be seen at the far end of the path that leads up to the church.  With the members of the household, together with various employees and tenants there would, once again, have been quite a congregation attending Church on a Sunday

But in 1849, the tranquil life of the valley was disturbed by the arrival of the railway, the line of which ran so close to Idsworth House that it was separated from its grounds and walks.  The then owner, Sir Jervoise Clarke Jervoise, found the situation intolerable, but accepted the compensation money from the railway company and promptly demolished the manor and built a new Idsworth house some two miles away taking with him the house contents and even the panelling.

Once again the church was left marooned on the hillside with no village, no road, and a much reduced congregation, but worst of all little income available for its maintenance.

Deterioration was halted in 1913 when the Lord of the Manor commissioned a young architect, H.S Goodhart-Rendell, to carry out repairs and improvements to the building and it is he who we have to thank for installing a new window on the south side of the chancel which so beautifully illuminates the treasure of St. Huberts, the wonderful 14th century wall paintings

When Henry VIII ordered the removal of all Catholic art in churches as part of the Protestant Reformation in the 16th century, it is indeed fortunate that in many cases local officials merely covered them with whitewash as a quick and easy way of following orders. In Idsworth church that is exactly what happened to its wall paintings. However, 300 years later in 1864, vestiges of the paintings had become visible and the rector, the Reverend J Astley, had the layers of whitewash removed revealing these wonderful artistic representations.

As in many English churches these wall paintings taught the story of Christ to the largely uneducated people who worshiped here in Medieval times, and the fact that no village now remains, makes them all the more poignant.

The meaning of the various scenes in the painting has been much debated but one is thought to show St Hubert either healing or restoring to human form a ‘hairy’ anchorite or hermit, who walks on all fours as a penance for inchastity.  In the lower half of the mural, St John the Baptist’s head is shown being presented to Salome at King Herod’s feast.

Despite all the pre-visit reading and photographs nothing prepared me for the joy I felt at my first sight of this marvel on a sunny September morning.

We found Saint Hubert’s Chapel standing  proud and assertive on the summit of a small hillock, a true symbol of Britain’s heritage, spanning across the Saxon and Norman divide with no sense of exterior conflict, truly a shining beacon of this country’s Christian heritage.

The walk up the grass path to the church was not as difficult as I had imagined, providing that I stopped frequently to get my breath back, the lure of the jewel before me kept me going.   MW as usual, strode ahead in order to set up his drone whilst the sun shone.

Almost like a penitent seeking absolution, I pushed open the ancient chapel door and was immediately confronted by a black poodle, followed by its owner.  Regular readers will know of my aversion to dogs, so I felt it was as if St. Hubert was expelling the darkness from the shrine.

Sinking into the nearest pew, the church was a delight as shafts of sunlight shone through the windows, their large size made it obvious that significant changes had been made over the centuries since the first part of the chapel was erected by the Goodwin family in 1053.  The box pews in the nave and the Jacobean pulpit complete with sounding board, are all later additions that seem to be perfectly at home here.

Surprisingly however, the whole hung together beautifully as most of the restoration had been done out of love for the church, including the more recent Millennium Fresco.

When alone in a church I often sing a hymn to test the acoustic and I have to report that this chapel exceeded all my expectations – even my voice sounded sonorous.

The descent was much easier and I had been very privileged to visit a gem which is still an active church and a beacon of continuing belief in faith that has stretched back for over a thousand years .    BQ

Finchdean and The George Inn

Just a mile away from the church is the nearest settlement, Finchdean.

Whenever we choose a new area to visit we both like to do some homework beforehand to be sure we don’t miss anything of interest.  When researching Finchdean I came across a photograph of the village taken in 1955 and wondered just how much it had changed in the past 60 years. In fact it didn’t seem to have changed much at all.  It has an old world charm about it helped by the fact there was virtually no traffic passing through the village, plenty of cyclists, but just the occasional vehicle

The George Inn seemed to be unchanged from the front, but at the rear there was a large conservatory, brightly decorated which is where we had our lunch,  albeit in solitary isolation

The food was tasty and well presented.  My marinated King Prawns were outstanding and the meal was efficiently served by our friendly waitress Leanne, a student at Brighton University. 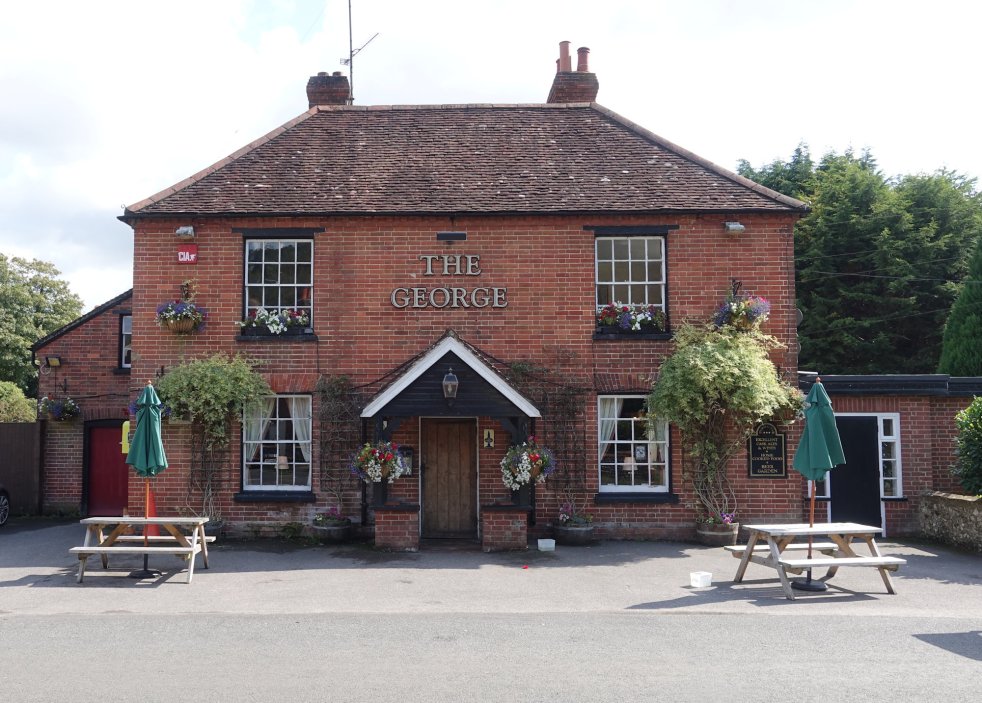