Wolverton is situated just about as far as we could travel yet still be in Hampshire, a little further north and we would cross the border into Berkshire.  The day started crisp and bright and became increasingly frosty as we travelled further from the coast. It was an uneventful, speedy journey and we arrived in Wolverton a good 45 minutes before our pre-arranged meeting with the Reverend David Barlow who had kindly offered to unlock the church at noon.   That gave me plenty of time to get some exterior photos of St Catherine’s Church which, to my eye, is pleasingly proportioned despite being criticised for the size of its tower in relation to the unusually compact nave and chancel.   As I manoevered the drone, my concentration was interrupted by the sound of an anguished cry that had come from BQ who was now lying prone in the frosty grass having stepped into a hidden rabbit hole.  Mercifully, he was uninjured – apart from pride – and was soon back on his feet but we retreated to relax back in the car and, more urgently, warm up.  Soon after, the genial Reverend David arrived.

The first mention of a religious building on this site was in 1286.  In the early 14th century a flint and wood church was constructed which survived until 1717 when the building was entirely encased with local hand-made brick with the original wooden roof being retained. 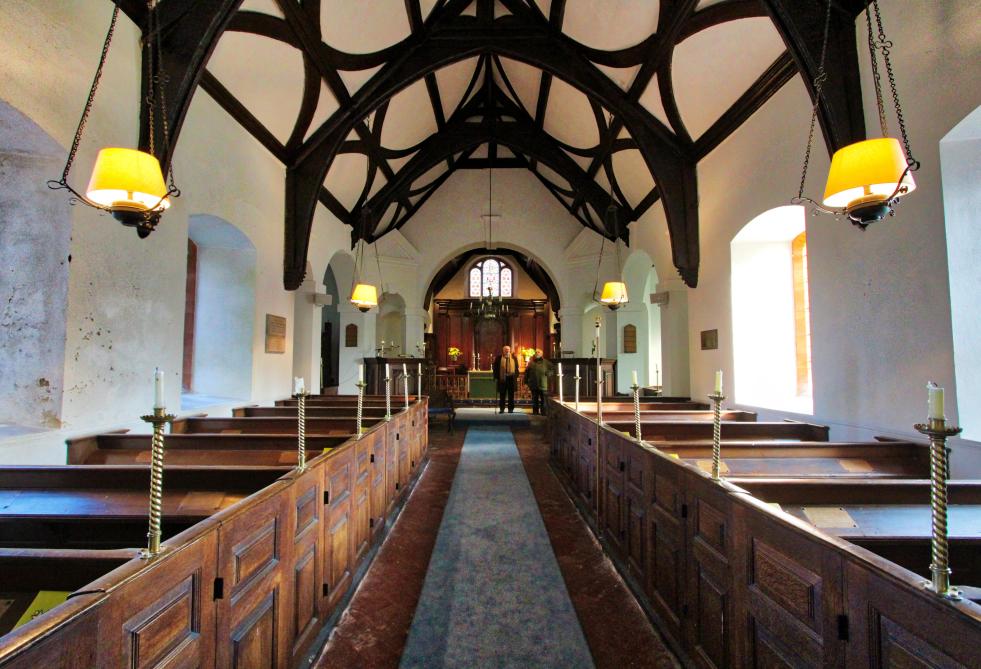 The roof beams are original 14th century and form the shape of fish denoting the ancient Christian symbol for Jesus.  The box pews are also Georgian each being adorned with an original twisted brass candlestick.  Candles are still lit for evensong.  Brass plates in the pews reminds worshippers that they must turn up on time, sing heartily, kneel for prayers and stay kneeling at the end of the service, but above all they should keep their thoughts on holy things  (surely easier said than done!)

BQ and David sat chatting throughout our visit clearly having much in common.  In the background is the family pew once reserved for the Duke of Wellington who sometimes worshipped here with his family.

We are indeed grateful to David for giving us his time, as I see from the church website that his benefice includes not only Wolverton, but three other adjacent parishes. 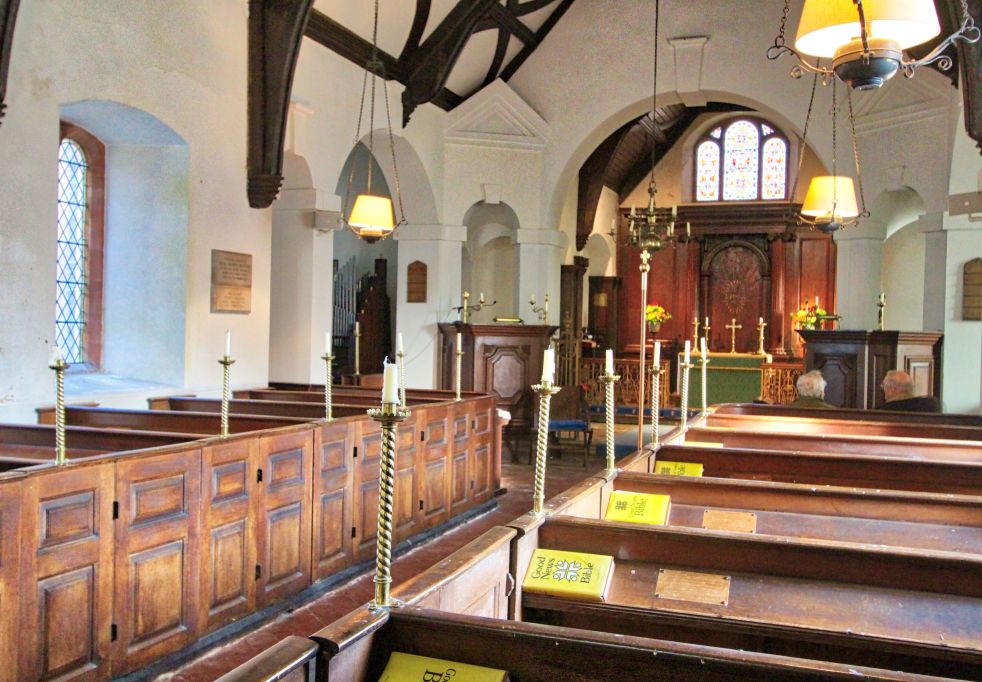 An unusual feature of the church is the two Spanish Oak pulpits situated on either side of the  entrance to the chancel, one to be used for sermons and one for prayer.  They are exactly alike, reflecting a time  when praying was not considered to be above preaching, nor preaching above praying.

The sanctuary, panelled with dark oak, is very impressive while, over the altar, a central panel contains a star formed from different shaded woods, giving a wonderful sense of reverence.

Generally I am not an avid TV viewer, but I must confess to having been temporarily converted at the time that Downton Abbey was being shown.  I thought that the entire series was beautifully crafted, with superb acting and direction and all against a background of the iconic building that was the fictional home to the Crawley family.   In reality Downton Abbey is Highclere Castle and the real owners are the 8th Earl and Countess of Carnarvon.   When we had the opportunity to join a tour of the castle as part of a small group to be personally hosted by the Countess, it was too good to miss, particularly as it is situated no more than a 20 minute drive from Wolverton Church.

However, as we weaved our way along country lanes towards Highclere, the bright autumn sunshine was replaced by a cold, dank and penetrating mist which discouraged plans of exploring some of the castle’s 1,000 acres before our 1.30 pm tour.   I did leave BQ for a while to go as far as the nearest of the five follies – The Jackdaw’s Castle, which is set on a small hillock a couple of hundred yards away designed, no doubt, to improve the view from the castle’s principal rooms.  I came back to find BQ, together with some of our fellow guests huddling around the front door hoping to be allowed in early to escape the cold, but the welcome sound of the bolts being slid open did not occur until precisely 1.30.

As we all waited to be let in, while BQ lamented the lack of seating in the forecourt I noticed the imposing entrance into the castle.  It seemed to me that it was designed to overawe, even intimidate the visitor by projecting an impression of power, perhaps even ruthlessness, a feeling strengthened when I noticed the twin cast metal door knobs  which appeared to represent wolves’ heads, each with a severed leg in its mouth.

On entering the castle we assembled in the Saloon where we were warmly welcomed by the Countess who spoke to us from the main stairs giving a brief history of the estate from the time of King Cuthred who set out the boundaries in 749 AD.  Ancestors of the present family first acquired the estate in the late seventeenth century and the castle that we see today was constructed in the mid nineteenth century.

How times have changed; MW and I decided the day before our visit that a sense of respect for afternoon tea in such an august and dignified setting demanded at least a jacket and tie. It will probably come as no surprise to the more enlightened of our readers that we two stood out uniquely among the thirty or so guests who favoured sweaters, jeans and woolly hats.    Carson would have had a fit!

However, I have jumped ahead of the prime purpose of this trip which was a visit to the village of Wolverton and the grade one listed church of Saint Catherine whose feast day followed on the Sunday.    Southampton Art Gallery has a fine triptych depicting Saint Catherine and the philosophers painted by Van der Weyden, which also shows the wheel on which she was so cruelly broken, a dreadful form of execution still remembered in November by the firework known as the Catherine Wheel.

St Catherine’s Church is like an onion revealing its evolution in subsequent layers as you peel back from the 18th century brick exterior to its medieval heart.  The building is dominated by a tower completely out of proportion to the small nave and chancel and at the time of our visit one of the two altars, normally seen at opposite ends of the building, had been removed to provide space for a temporary memorial to local men who had fallen in the Great War.  This change helped to bring a little normality to the interior design although the feeling of eccentricity was still to be seen in the two identical pulpits at either side of the chancel arch. Nevertheless the church is a wonderful example of early Georgian furnishings with box pews and brass candlesticks, complete with candles.   At this time it is worth re-visiting one of our early visits to St Mary in Avington which shows how the style created at Wolverton reached its zenith but, at the same time, lost a little of its humanity.

Thence on to Highclere Castle for a tour and afternoon tea. By early afternoon the sun disappeared and a cold east wind froze the soul.   Approaching across the parkland in the foggy conditions all detail of the building was lost, and the house loomed large and black – a true gothic fantasy – all that was missing was Vincent Price.   During a cold wait outside, I made the acquaintance of a couple from Atlanta in Georgia USA, who said that this was the high spot of their European trip as they were fans of ‘Downton Abbey’.

For me the tour was memorable for the magnificent equestrian portrait in the dining room of Charles I by Van Dyke, and also the concern shown by MW in carrying my chair from room to room.   The self service tea was served in the outhouses at the rear and was a disappointment for someone who was expecting white gloves etc.  However after his kindness, MW stated that ‘this was how they served tea at the royal garden parties which he had attended’.    Yet again I knew my place!