Since we began this internet diary of at the beginning of 2017 we have visited almost 30 churches.  It seems a lot, but in fact is just about 10% of the total number in Hampshire.   With an area of almost one and a half thousand square miles, our county is the second largest in the south of England, and during this past twenty months, we have had the opportunity of travelling to all four corners. Throughout these journeys we have been constantly impressed at just how beautifully unspoiled this special part of the United Kingdom is.  Surprisingly however, until now we have not featured the particularly attractive village and historic church that is just a short walk from my own home. 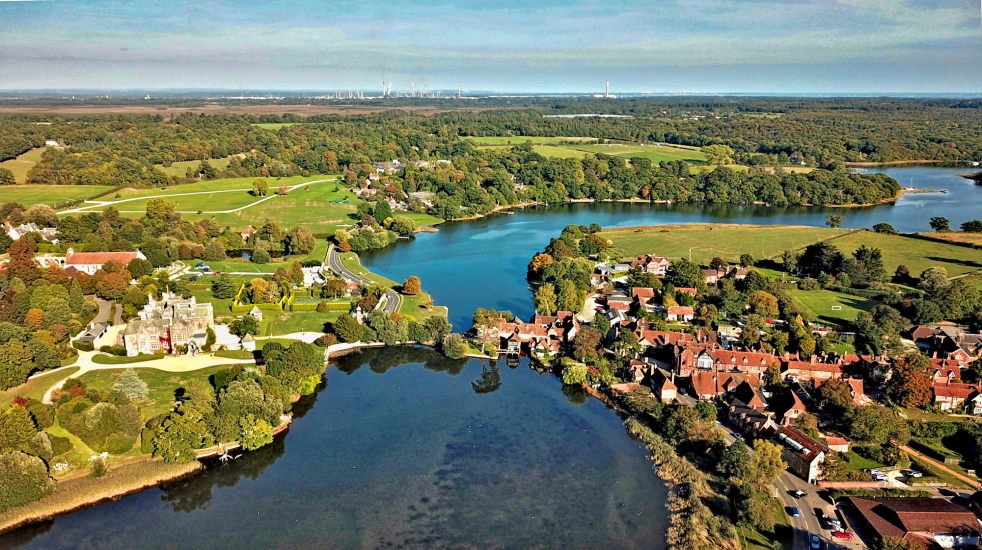 Beaulieu is divided by the tidal river of the same name, and the opposing banks are connected by a causeway and bridge.  The original purpose of the causeway was to allow the rising tide to fill the lagoon in the foreground of the picture and then, at high tide, the sluice gates would be shut and the water held until it could be released at low tide driving a water mill that is situated in the centre of the causeway.   This 17th century tide mill, as it is known, and is one of very few that still survives.

The village centre and high street can be seen on the right hand side of the river and on the left is Palace House, the home of Lord and Lady Montagu.  A little further back the red roofed Beaulieu Church, the subject of today’s visit, can be seen. 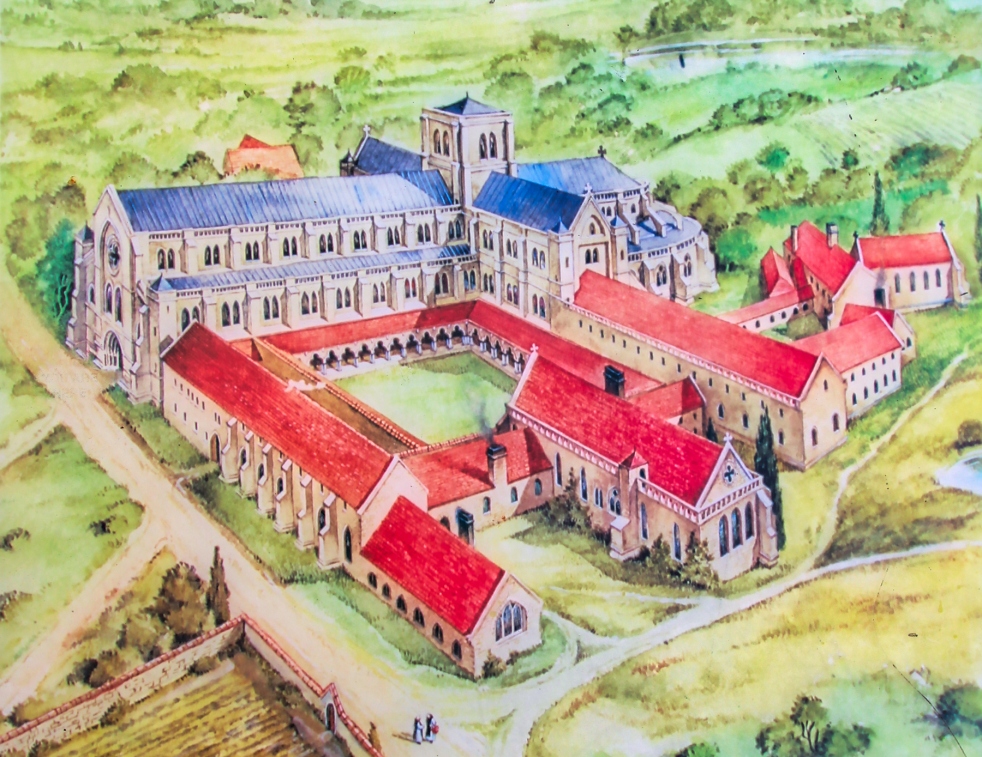 The church that we see today is one of two surviving sections of the once great Cistercian Abbey that was founded in 1204 and completed in 1246.  In common with many other religious buildings it was destroyed 300 years later on the whim of Henry VIII during the infamous Dissolution of the Roman Catholic Monasteries.  The two wings of the abbey complex that were spared (because they were of no spiritual significance) were the Domus, the long building on the left, which was the sleeping quarters for the monks and the Refectory, the red-roofed building with the gables surmounted with crosses, which was where the monks had their meals.  Following the abbey’s demise, it is this building that was gifted to the village in 1538 to be used as the parish church, although of course worship would now have to be based on the recently introduced Protestant faith. 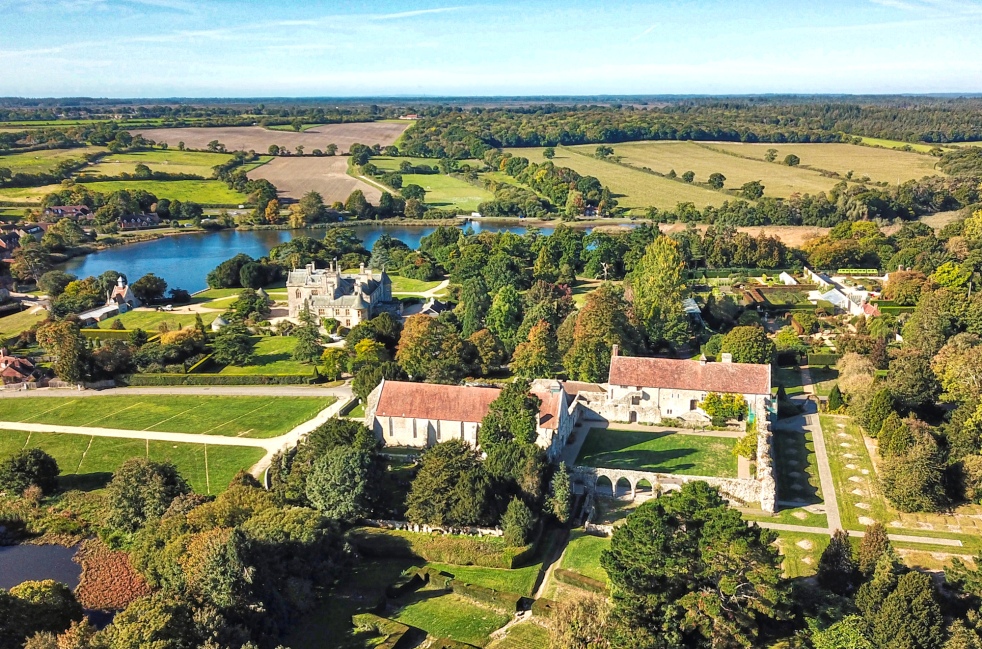 This photo shows the two surviving buildings as they are today, the Domus on the far side of the cloisters and Beaulieu Church on the left. The immense scale of the original abbey is apparent as the base of the columns that once supported the 102 metre long building, can clearly be seen. 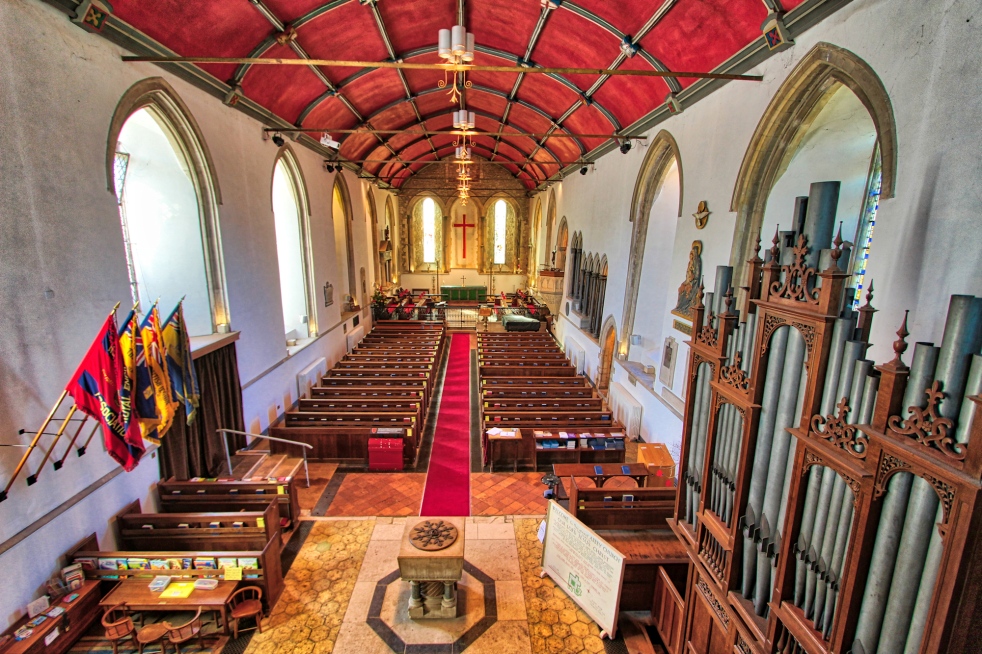 When we arrived at the church we were disappointed to find the building minimally lit and any attempt at photography would have been futile.  Unfortunately none of the staff had the authority to switch on the lights and it seemed that we would have to abandon our visit when, as if by divine intervention, the day was saved by the  arrival of the church warden, Peter Melhuish.  I have met Peter on a number of occasions during the past 15 years and know him to be a most capable and well liked member of the community.  True to form he had the lights turned on within a few minutes and the beauty of the church was revealed.

The basic structure of the building is unchanged from the time of its construction in the 13th century although some internal alterations and additions have been made since 1538. A chancel and a sanctuary was formed, vestries and a gallery built and in 1893 an unusually fine pipe organ was installed. 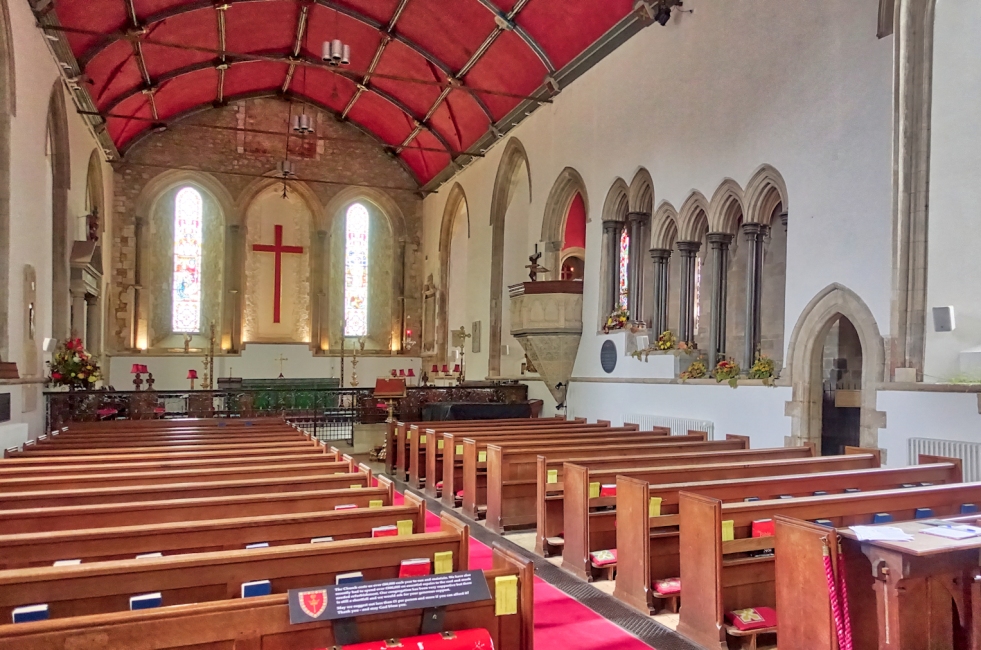 The most interesting architectural feature of the church is the unusual stone pulpit that is accessed by a stairway built within the thickness of the outer wall.  It’s original purpose was as a lectern that would have been used by a specially chosen monk who would read passages from the bible to the other monks as they sat silently eating their meals. 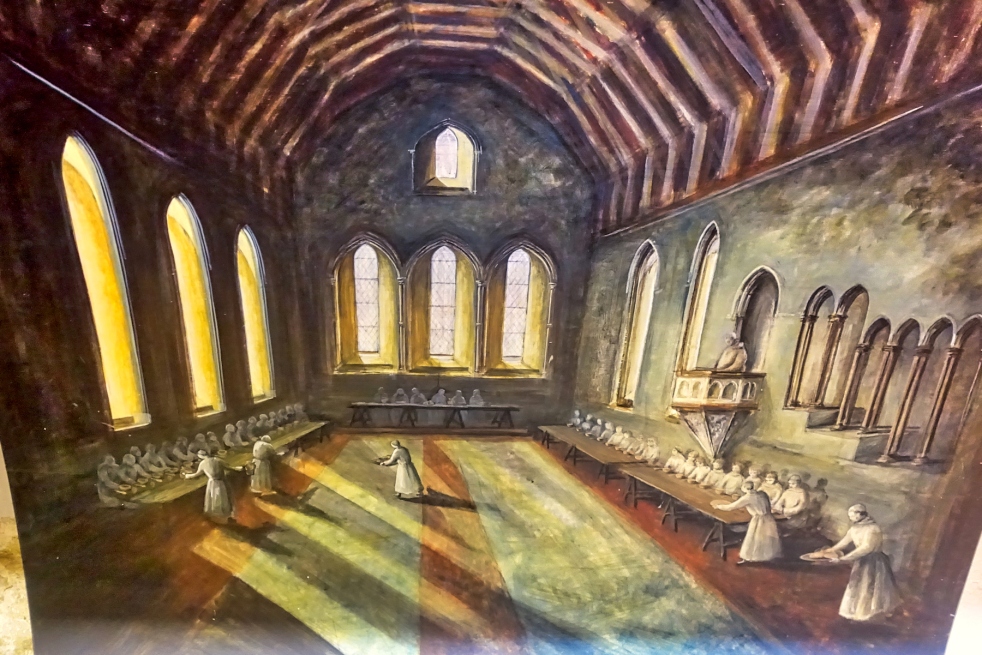 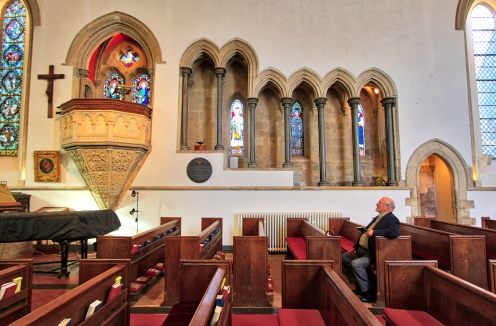 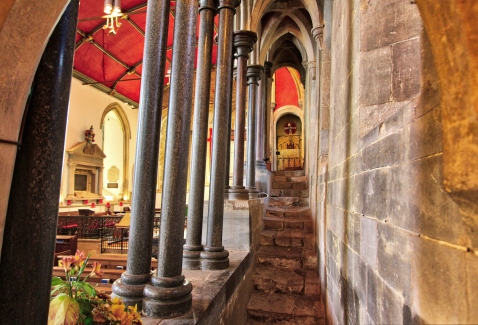 A better view of the pulpit.  BQ sits in  quiet contemplation.  The stone steps leading to the pulpit are heavily worn from the 800 years of ascending and descending feet.

If you are interested in finding out more about Beaulieu Abbey Church, I recommend their own excellent website;  https://beaulieuchurches.org.uk/churches/beaulieu-abbey-church

The great majority of visitors who arrive at the church see it as just one of the attractions that are included when purchasing an entrance ticket to the Beaulieu Estate and they access the church via a doorway from the cloisters.  It was in 1952 that Lord Montagu first opened Palace House, gardens and the abbey ruins to the public  – making Beaulieu among the first stately homes to admit visitors. In 1972 the National Motor 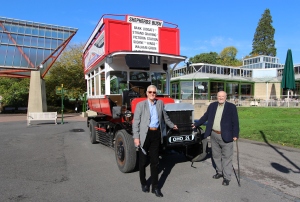 Museum was constructed together with a monorail that winds its way through the gardens and, as a result, Beaulieu has become one of the most popular family attractions in the south of England.

After leaving the church, BQ and I walked through the cloisters for a quick look at the Domus museum before boarding the vintage bus that took us through the grounds to the Motor Museum.

The museum came from small beginnings.  Originally it consisted of just five vintage cars displayed inside Palace House.  They were a popular attraction and the collection steadily grew until it had to be transferred into wooden sheds in the grounds of the house.  By 1964 the annual attendance had grown to half a million and so the idea of creating a purpose built building was conceived.  A design committee chaired by the architect Sir Hugh Casson was formed and on 4th July 1972 the contemporary building that we see today was opened by the Duke of Kent.  The museum now has a collection of 285 vehicles dating back to 1875. 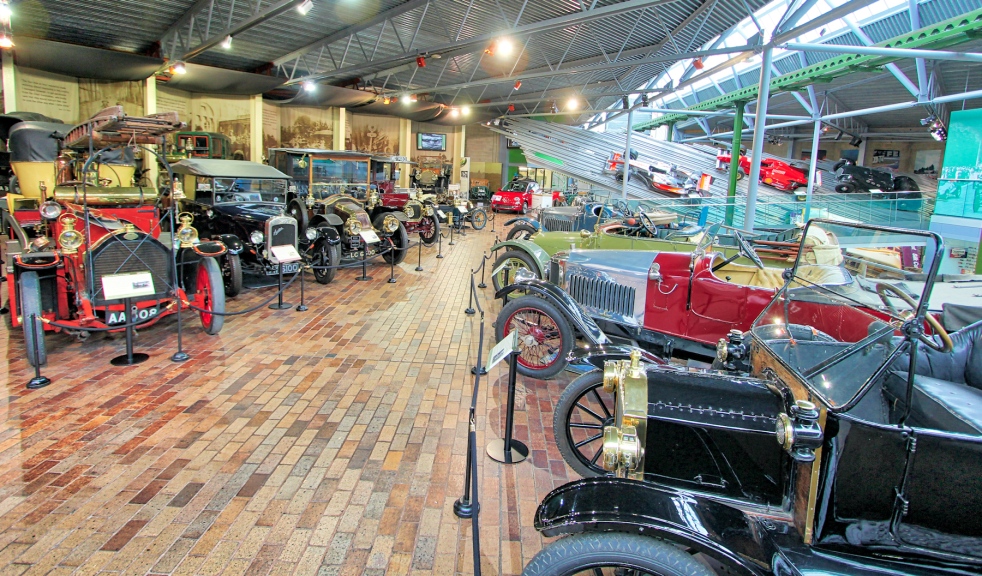 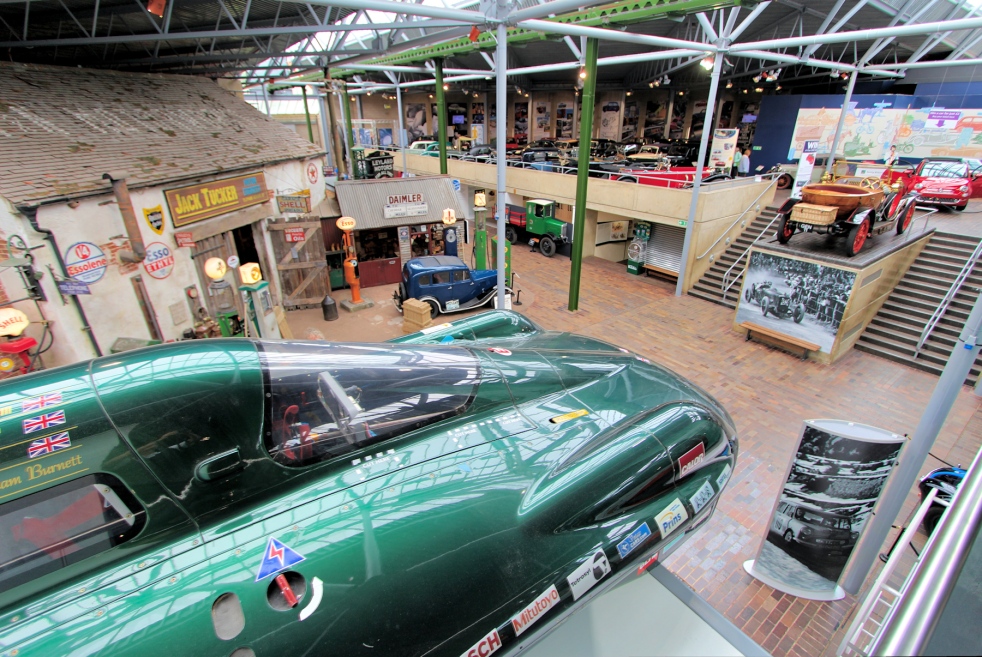 I have walked around the museum many times, usually with grandchildren in tow – there always seems to be something new and interesting to see.   Last time I visited there was a display of the various vehicles that had been used in the James Bond movies.  This time it was a celebration of the 50th anniversary of the film, Chitty Chitty Bang Bang.  The original vehicle can be seen between the two flights of stairs in the above photo.

BQ has no great interest in the internal combustion engine and so we did not stay long before re-boarding the old London bus that took us onward to Palace House. 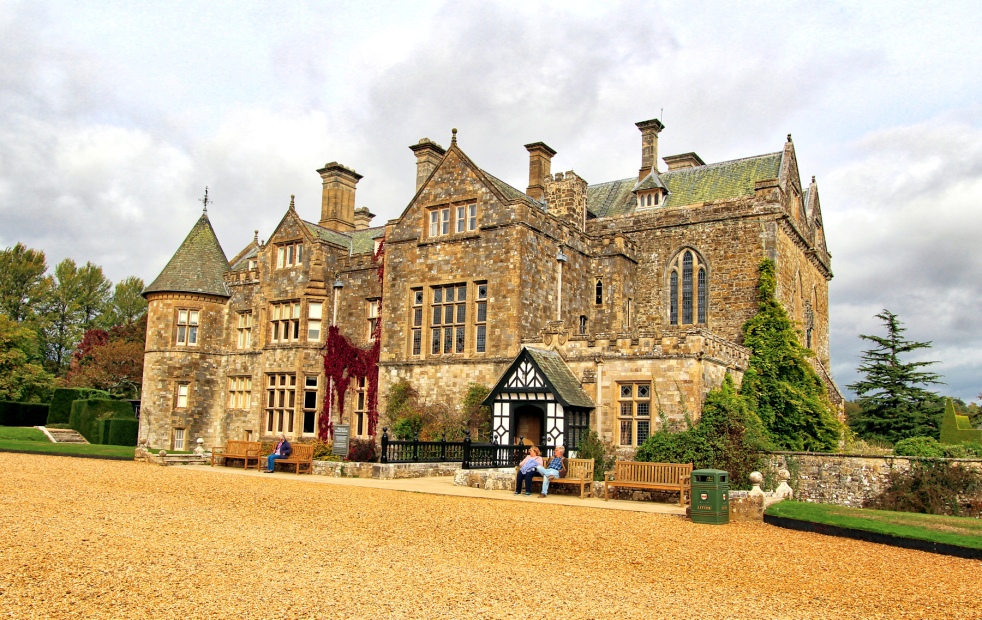 When the fate of Beaulieu Abbey was sealed in 1538 there was a great deal of competition amongst the King’s courtiers as to who should be permitted to purchase the abbey and its valuable estates.  Thomas Wriothesley, the 1st Earl of Southampton and an ancestor of the Montagu family, finally won the struggle and set about building a house on the site, using the great gatehouse of the abbey as the core of his new mansion that, when completed, became known as Palace House. A good proportion of the building, which has been kept in the Victorian style, is open to visitors who are guided around the elegant rooms by the friendly guides in appropriate 19th century dress. 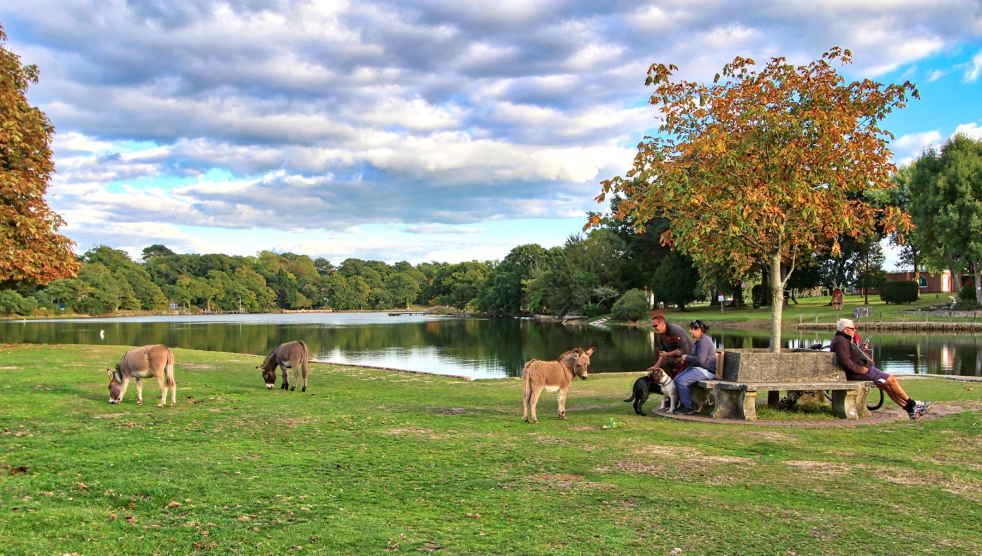 We were given the rare privilege of being allowed out of the Palace gatehouse directly onto the village green close by our lunch venue. The kindly guide, magnificently dressed in bow tie and tails, opened the ancient wooden gate that led onto the village green where there were a few donkeys grazing.  There is usually a dozen or so of these lovable animals that have the run of the village and, although they can be a nuisance when holding up traffic or sheltering in shop doorways on rainy days, they look so appealing they are invariably forgiven. 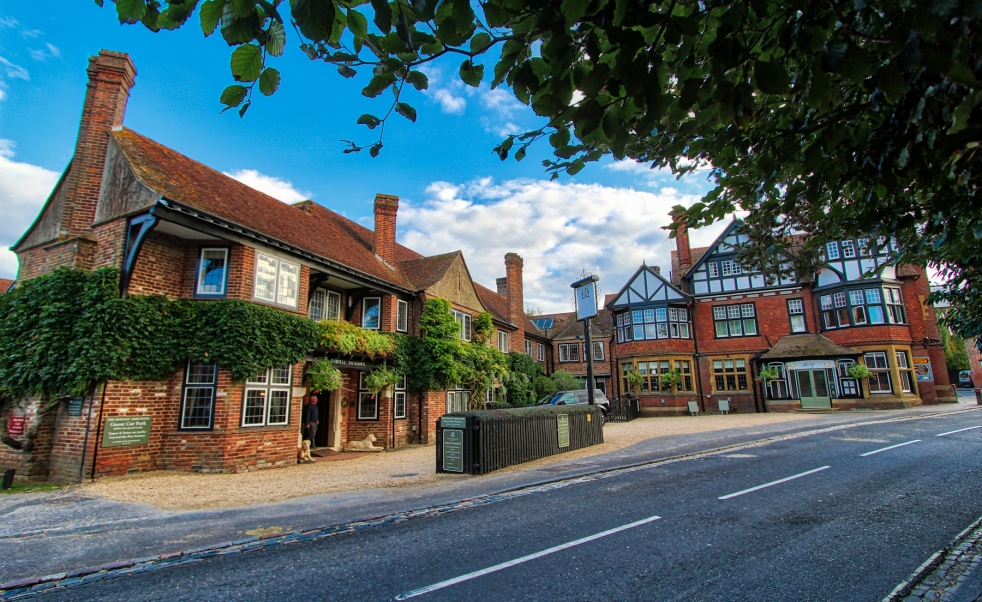 From the village green it is just a short walk over the bridge to the Montagu Arms.  We had our lunch in Monty’s, all beautifully presented although less refined than the Michelin starred restaurant in the next room.  The food was excellent, we both chose the plaice, but I felt a little guilty when I noticed that BQ’s diminutive fish looked as if it could have been the child of my own magnificent specimen.  Service wasn’t particularly speedy but that didn’t bother us as it usually means the food is being fully prepared to order.  An additional bonus was that it gave us time to fully discuss the tangled Brexit dilemma and work out a satisfactory solution!

Dine and Divine visits its spiritual home as this parish church was originally a canteen not unlike those associated with other profitable enterprises.  For the Cistercian abbey, from which it was so cruelly separated after the reformation, would have represented very rich pickings for a monarch short of cash.  Apart from not facing east it converts effortlessly into an excellent graceful and lofty church, in contrast to its rather plain exterior which still resembles an appendage to the original main building.  Within the Cistercian rules, silence was rigorously enforced during meals which were eaten whilst readings from the bible were intoned from a prominent vantage point.   The importance of this custom is demonstrated by the church’s most original and unique feature which is now used as a pulpit.  The sheer beauty, design and workmanship of this structure leaves one open mouthed at the thought of what was lost in the demolition of the Abbey itself.

Four centuries later, the church’s unblemished reputation was put at risk when I appeared here in a performance of ‘The Gondoliers’ with the Southampton Operatic Society in 2009.  My role was that of a shabby tramp in a raincoat and a cloth cap who is roughly handled by the gondoliers and eventually transformed into a toff. 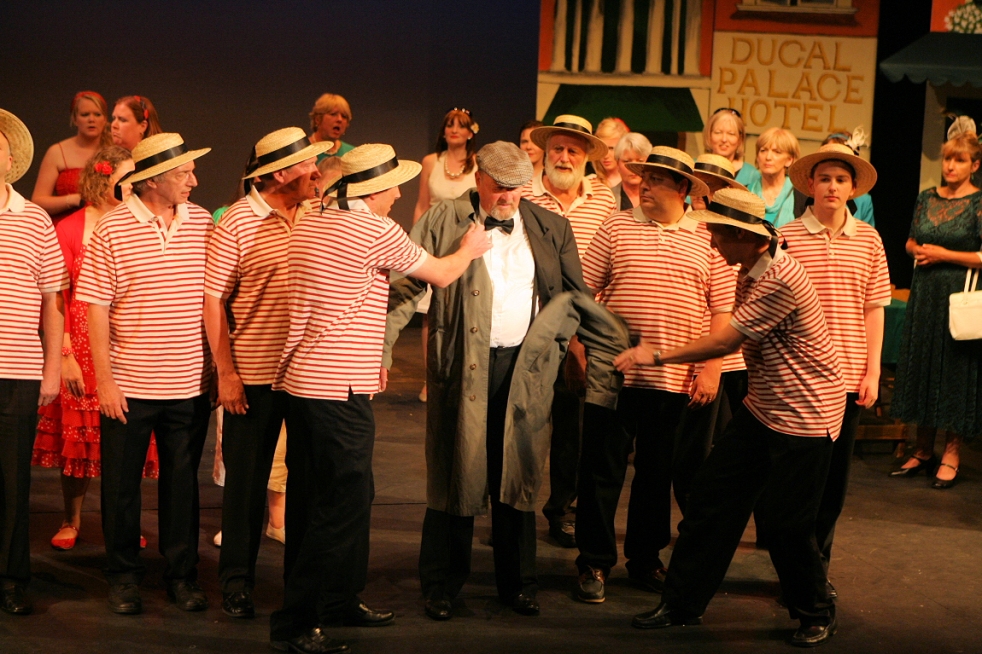 In order to enter from the rear I took a seat at the back of the nave before the performance began.  During the interval I was approached by a member of the audience who told me that he was staying in the local hotel and had asked the staff if it was likely that he would see Lord Montagu.  The staff advised him that if he were present he would be dressed very modestly.  The guest continued; ‘So when I saw you walk up the aisle I said to my wife there he is’.   It is to be hoped that the rest of the audience was not as disappointed as he obviously was.

In conclusion this felt like a real working parish church at the heart of the community and it was good to see the lighted candle on the altar signifying the presence of our Lord.

Our convoluted journey to our lunch at Monty’s was completed by an ancient omnibus, the good offices of a tail-coated retainer and a secret passage, all of which was as at one with the setting.  The Montagu Arms was quiet which was hardly surprising as they were re-surfacing the road outside, but our welcome was warm. At long last I found the perfect compromise in the napkin debate for although it was paper it was ample size and durable.

Once the carafe of Pinot Grigio had arrived there followed a discussion as to whether we could both have the fish course. Normally an attempt is made to vary the meal but with no compromise in sight we both had the plaice.  My joy however was short lived as, when the fish arrived, I would swear that MW’s fish was twice the size of mine and so, yet again, I knew my plaice!