In contrast to the frustrations and disappointments during our last church visit, our day in Romsey couldn’t have gone better.  The weather was warm and sunny, the roads were quiet and within 30 minutes we were negotiating Romsey’s convoluted road system to arrive at Romsey Abbey.  Parking might well have been a problem but BQ’s disability badge yet again came to our aid and enabled us to park conveniently within the Abbey precincts.

As it was still relatively early in the day, the east frontage of the Abbey was still bathed in sunlight so I quickly deployed the drone to capture a clear view of the most impressive elevation of the Abbey.  From above, the building appears to be very nearly symmetrical if somewhat squat.  It’s not until viewed from the side that the true  scale of the building becomes apparent. It really is quite vast considering that Romsey is a small town.

I caught up with BQ who was in quiet contemplation in St Anne’s Chapel and after a few minutes exploration it was obvious that our modest internet diary couldn’t begin to do justice to this iconic building. The best we could do was to record and comment on things that particularly caught our eyes.

For 650 years, until the time of the dissolution, Romsey Abbey was a centre for female worship and education. It was founded by King Alfred’s son Edward as a nunnery in 907, but the early years were very unsettled due to the persistant attacks on Christian buildings by the pagan Vikings.  Eventually the building had to be rebuilt following its almost total destruction by Sweyn Forkbeard and his soldiers in 994. The nuns, apparently warned by divine intervention, were able to flee to the Nunnaminster in Winchester.

In the 12th century, following William the Conqueror’s invasion in 1066, the Abbey was again rebuilt, but this time in the Norman style that we see today.  The building now housed not only the convent which occupied the southern section of the building, but also the town’s parish church which was situated in the northern side.  Life for the nuns eventually settled down and the convent flourished until the catastrophe of the Black Death which swept through England in the mid 14th century. The convent was particularly badly affected and it’s numbers went into a decline which continued, not only in quantity but in quality. While nuns of the Saxon and early Norman period generally had a genuine vocation, by the Middle Ages convents had become a convenient place to dispose of inconvenient women. Here, families could leave daughters who were unlikely to attract husbands due to either a lack of looks or a lack of a dowry, husbands could confine an unfaithful or unwanted wife and many widows simply had nowhere else to go.

The building was saved from demolition during the Dissolution of the Monasteries in the 16th century, not only because of its size, but also because the building provided the only place of worship for the residents of Romsey who were permitted to purchase the building for £100.  However, as decreed by Henry VIII, the convent was ‘dissolved’.  Little is known of the fate of the remaining nuns apart from the case of  a Jane Wadham who married the Abbey Chaplain claiming that she had been forced into the convent and did not feel bound by her vows.

The first impression on entering the cathedral-like interior of the Abbey is one of surprise at just how spacious it is and it is hardly surprising that, in the past, some of the space has been used for purposes other than as a parish church.  In the early part of the 18th century a Free School and a Grammar School were established within the building and several old prints exist showing children playing among the graves. During the 19th century some of the town’s fire-fighting equipment was stored in what is now the choir vestry and, when a fire was reported, the Abbey bells were rung to alert the firemen.

St. Anne’s Chapel;  looking very fresh and bright and for good reason, as it has only recently been ‘re-ordered’.  One never imagines that sections of a church need periodic refurbishment, although admittedly not that frequently, as the last time the Chapel was fitted out was in 1855 under the direction of the then Vicar’s wife.    During the recent work much of the timber has been expertly and sensitively replaced including the altar.  But, what is most impressive, is the way that modern LED lighting has been used to illuminate the Abbey’s most precious relic, the 1,050 year old Saxon rood.

A rood, basically a cross or crucifix, is most commonly seen above the entrance to the chancel in medieval churches.  Early Saxon roods are extremely rare yet Romsey has not one but two of these treasures.

Romsey Abbey has such a wealth of impressive memorials and it is difficult to choose which ones to feature, but three seemed to us to be particularly notable, one flamboyant, one famous and the other poignant.

The Head of Plaited Hair 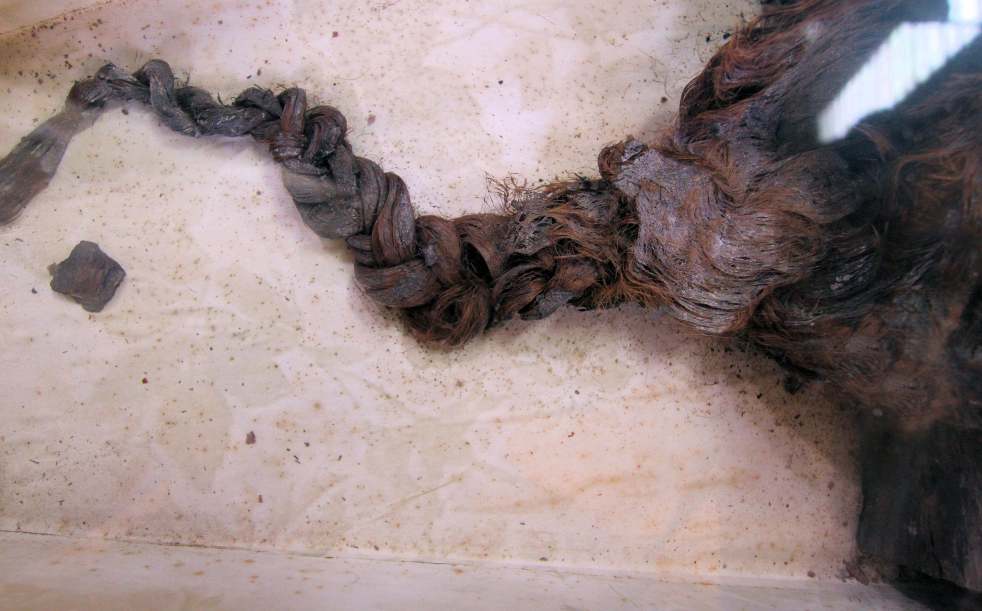 Until 1853 burials within the church building were permitted, and a considerable number of people lie under the Abbey floor.  In 1839 John Major, the sexton at the time, discovered an ancient lead coffin five feet below the floor level and, on removing the lid, found ‘a beautiful head of hair, with a tail plaited, evidently that of a young female lying on a block of oak. The hair was in perfect form and appeared as though the skull had only been recently removed from it.’   There was no inscription of any kind.   The sexton showed it to the vicar who, obviously uninterested, threw it into his coal hole and had the coffin sold for old lead.  Mr Major however rescued the hair, which had been considerably damaged in its treatment, and had it enclosed in a glass case where it can still be seen.

In 2016 the team at the Oxford Radiocarbon Accelerator unit studied the hair and concluded that there was an almost 70% probability that the person had died between 965 and 1045 AD. They also concluded she had enjoyed a diet rich in fish, although quite how I cannot imagine.

There is a fascinating collection of corbels carved around the outside of the building, some of mythical beings and some depicting bestiaries – strange creatures that, in medieval times, were believed to inhabit far off lands. Shown above left is a Blemmyae, a headless human figure with its eyes, nose and mouth on its chest.  On the right, next to the cat-like creature, is a strange looking humanoid playing a rebec.  Several of the corbels seem to resemble cats and it has been suggested that this may be because they were popular pets with the nuns.

Our visit was made so much more enjoyable as a result of meeting Liz and Brian who are based at the Abbey and whose knowledge of the building was comprehensive.  We are indeed grateful for their time in sharing their knowledge with us.  For anyone who has an interest in Romsey Abbey I can thoroughly recommend Liz Hallett’s various books and booklets on the subject.

I enjoyed my meal at La Parisienne without reservation.  I felt that both food and service were faultless and fully deserved five stars.    BQ and I had a full and frank discussion on the level of this award, as he felt that one star must be deducted for the failure to provide proper napkins.  Frankly it matters little to me whether the serviette is of linen or any other material and we failed to agree.  However as I type up the blog – five stars it is! 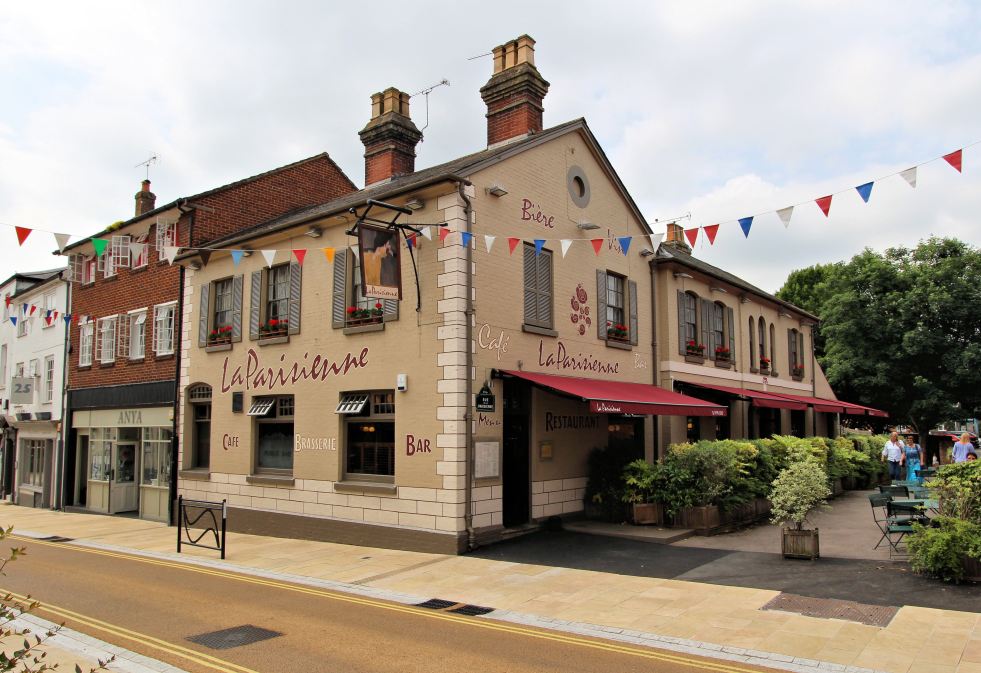 A favourite church
Over the thirty eight years that I have lived in Southampton, my frequent trips to Romsey have never been complete without a visit to the Abbey church, and the wonderful feeling of devotion that it has always aroused in me.
Although built on the scale of a cathedral, its grand demeanour has never overpowered the warm and comfortable interior and the hospitality of the welcomers.  It also does not have an entrance fee which I feel demeans a holy place.  So it was with a feeling of excitement that I was able to write on this building which has given me so much joy in the past.
Although the occupying force of the Norman invasion of 1066 now dominates what we see today, fortunately there remains Saxon artefacts that are worth a visit on their own.  The greatest of which is the wonderful Saxon Rood which can be found on the outside wall of the south transept which is not a crucifixion scene despite the spread arms. The crucifixion scene which is also a Saxon rood is reserved in a chapel and together with a coffin lid of a medieval abbess these represent some of the finest remnants of this lost period of our history.
That having been said, the Normans were wonderful builders and the interior is massively proportioned with the three decks of arcade, gallery and clerestory. The westernmost bays however are early gothic, but do not disturb the integrated rhythm of the whole.  How often I have stood in such buildings and marvelled at the artistry of all those nameless masons who crafted such beauty, but at Romsey a sprightly mason has signed his work with his name Robert.  Of course the locals have now renamed him ‘Bob the builder’.
The capitals, corbels and carvings are a fitting testament to their art as faces, battle scenes, animals and musicians all stare down on you both inside and out.  Having, over the past millennium, graduated from a nunnery, parish church, school room and even fire station the building is nothing short of adaptable.
In contrast the La Parisienne restaurant has only been on its present site for thirty years, which is also a sign of high quality and service to the town.
As with the Abbey, my visits to La Parisienne have recently been less frequent as its charms have been reserved for high days and holidays.  As usual, I was transported to Paris very quickly without the necessity of travelling on Eurostar.
MW having spent the previous week trekking in the Lofoten Islands living on a diet of dried cod and whale-meat, and having stated that he had eaten and smelt enough fish to last a lifetime, then proceeded to order a Dover Sole.
The food and service were impeccable, and I would be very happy to award five stars but for the paper napkins which is a perennial grouse of mine.
Mind you on our last trip we had immaculate white laundered napkins and poor food.  Yet again you can’t win them all.  BQ