After three Dine and Divine visits using rail transport we had to revert to car travel for this visit, there being no railway station close to Boxgrove.  It was slow going as 15 miles of the M27 are being converted to a so-called Smart Motorway.  As we drove along I was surprised to see that the re-aligned nearside lane was now hard up against a fence or wall in many sections.   In these days where so much in life is governed by health and safety considerations, it seems extraordinary that if one is unfortunate enough to breakdown away from one of the infrequent emergency refuge areas, there is no escape.  The horrific reality is that the only option is to sit in the car and pray for a quick rescue, whilst there is very good chance of being obliterated by one of the numerous heavy goods vehicles speeding along nose to tail on this busy route that connects Southampton and Portsmouth.

However, I don’t want to appear too curmudgeonly as I remember complaining about the travelling in our last visit.  So… moving on, soon after passing Chichester we arrived at the pretty village of Boxgrove and, right on cue, came across the Boxgrove Stores and Tearoom.  On entering, it was clearly the local community centre as well.  We found a table well away from the animated group discussing vital village matters and enjoyed a decent cup of freshly brewed coffee together with some valuable advice regarding the best nearby eaterie for our lunch. 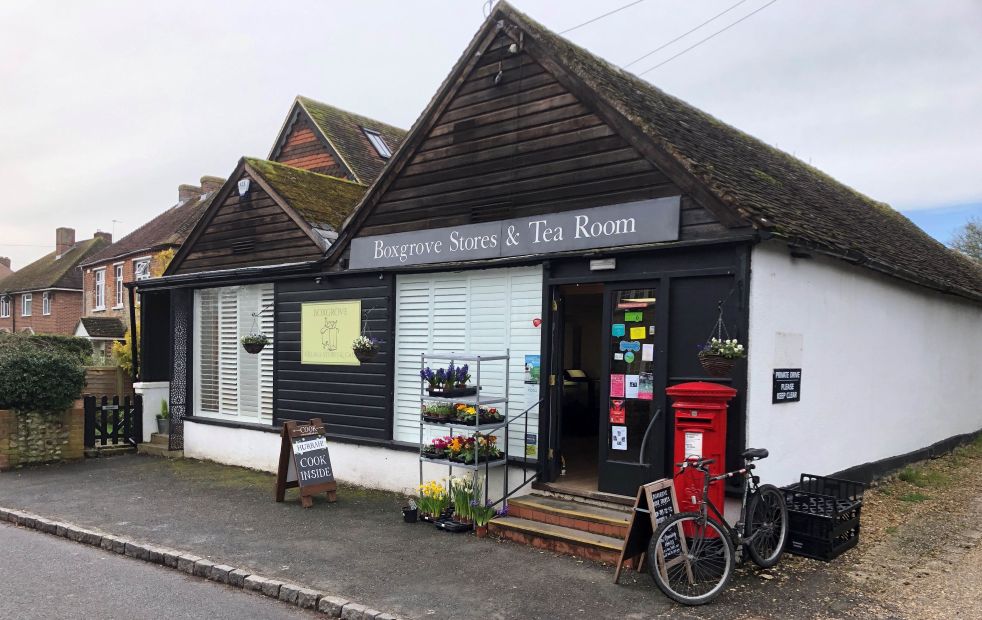 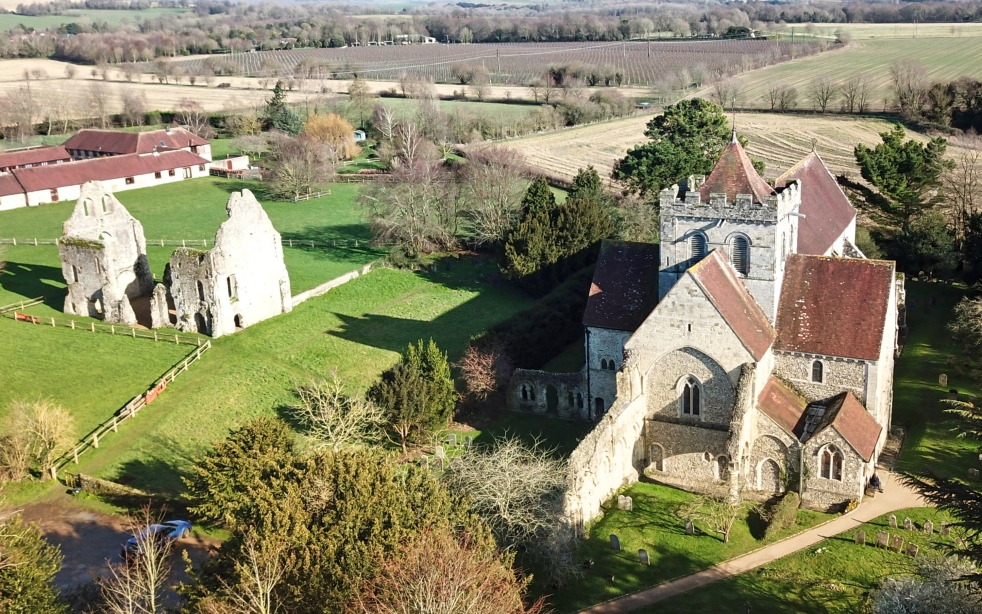 Although nothing remains of the Anglo-Saxon church that was recorded in the Domesday book of 1086, the Priory Church of St Mary and St Blaise that we see today is part of a Benedictine Priory that was founded by Normandy on the same site in 1117.   The building is surrounded by the ruins of the original monastery, the most obvious being the shell of the priory guesthouse that can be seen in the above photo in the adjacent field.   From the foundation of the priory until just after the reformation, the Priory was maintained by the Anglo-Norman family of the de la Hays of Lessay in France and then, by family link, the de la Warrs whose name is immortalised by Boxgrove’s most impressive monument, the fabulous de la Warr chantry installed just before the reformation by Thomas West, the 9th Lord de la Warr.

The French influence can be seen in the steeply-pitched roofs and flying buttresses. The wall to the left of the porch was once part of the original priory.  BQ sits by the porch enjoying the sun.

In 2008-09 the whole church was closed for restoration and most of the floor was taken up.   Incorporated into the new flooring is this remarkable labyrinth, designed in a darker stone, which is situated under the crossing.  This is the second time we have come across a church labyrinth, we saw an earlier one last year in the 1866 St Mary’s Church at Itchen Stoke.  Labyrinths, which pre-date the Christian Church have a point of entry leading to a destination.   Traditionally Christians were expected to make a pilgrimage to Jerusalem in order to follow Jesus’s footsteps and visit the places where the gospel stories took place.  However, human conflict in the Holy Land made the journey unsafe and one of the solutions was to make a symbolic spiritual pilgrimage using a labyrinth. I see from the church notes that walking the labyrinth in Boxgrove Priory Church is encouraged as an act of ‘self examination’ or ‘thanksgiving’.

Seen here are the pulpit, the de la Warr chantry and the high altar, the stone top of which came from the 15th century chapel of the Halnaker House, now in ruins. 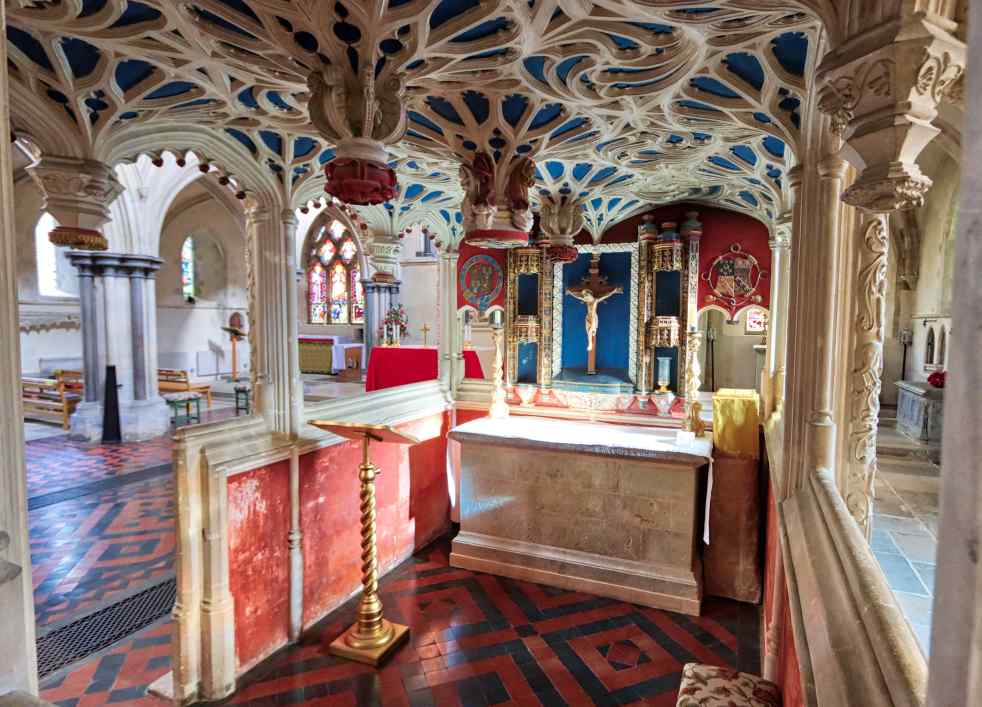 The de la Warr chantry chapel constructed in 1535 is the most extraordinary piece of Tudor architecture, with some of the finest 16th century carving anywhere in Britain. It is quite breath-taking, particularly the astonishing decorative vaulting and pendant bosses that are embellished with Tudor symbols and the de la Warr arms entwined with flowers and foliage.    Unfortunately, within a few years of the chantry being built, Henry VIII decreed that monasteries be dissolved and chantrys abolished and so the structure could only function as a tomb, but alas, not for the De La Warrs as he fell out of favour and was compelled by the King to exchange the manor of Boxgrove for an estate in Hampshire. 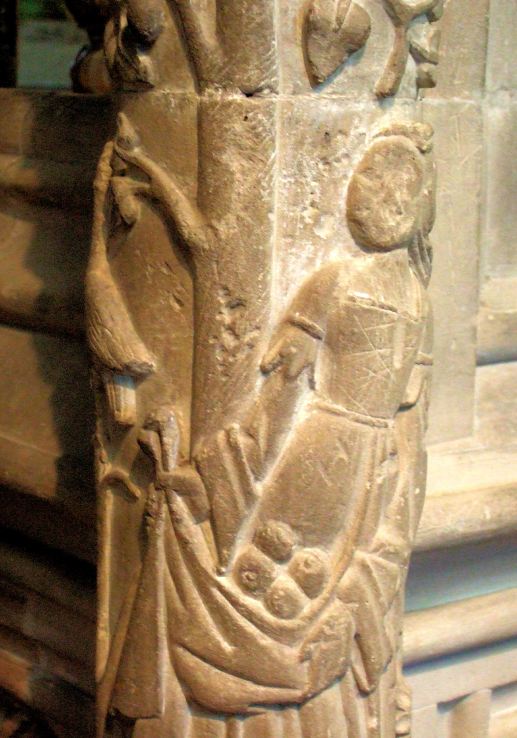 One of the pillar carvings in the chantry depicts a man climbing a tree while a maiden waits at the base. This scene represents the ‘danse macabre’ or dance of death, a common theme throughout the late middle ages, originally inspired by the catastrophe of the 14th century Black Death. 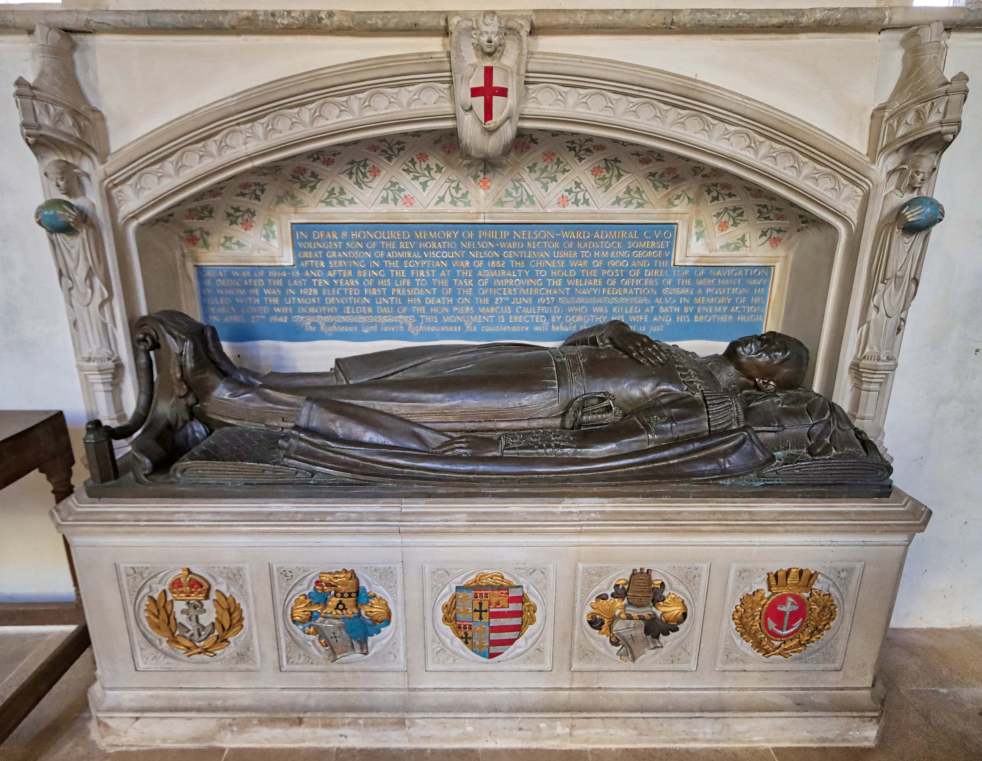 The tomb of Admiral Philip Nelson-Ward who died in 1937.   Strangely, he is depicted in the manner of a medieval knight, but dressed in naval uniform.   He had seen action during the 19th century in Egypt and during the Boxer Rebellion and was recalled to service in order to assist with the organisation of North Atlantic Convoys during the First World War.  In 1919 he was appointed Gentleman Usher to the King, holding the post until the death of George V in 1936.

St Catherine’s Chapel, dedicated to the martyr who was put to death by being ‘broken at the wheel’ after refusing to renounce her faith as was demanded by the emperor Maxentius.    The lancet window on the left shows St Catherine with the ‘Catherine Wheel’ upon which she was put to death.

The nave ceiling is spectacular considering that it was painted in the 1530’s.  As with the chantry, it was commissioned by Lord de la Warr.  Each of the four bays in the vault is decorated with his personal heraldic achievements and badges together with those of his parents and wife’s family.  Considering the scale of his investment and his life-long dedication to the church, one can only imagine Lord de la Warr’s despair when he was dispossessed of the building together with the manor as a result of the  “greed and violence of Henry VIII’s regime”. 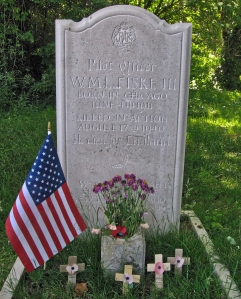 We left the church and walked out into the unusually warm winter sunshine.  BQ relaxed in a seat by the porch while I explored the graveyard and came across an intriguing memorial.    Billy Fiske III was born in Chicago in 1911, son of a New England banking magnate.  He was first educated in Chicago, then later in France where he discovered the sport of bobsled. In 1928, as driver of the first five-man US bobsled team to win at the Olympics, Fiske became the youngest gold medal winner in any winter sport.   He then attended Trinity Hall, Cambridge and, after graduation, worked at the London office of Dillon, Reed & Co, the New York bankers. In September 1938, he married the Countess of Warwick.  Shortly before the outbreak of World War II, Fiske was recalled to the New York offices of the bank, but in August 1939 he returned to England and joined the RAF.   In his diary,  Fiske wrote, “I believe I can lay claim to being the first U.S. citizen to join the RAF”.  On 16 August 1940, in the midst of the Battle of Britain he was scrambled to intercept a squadron of German dive-bombers. Fiske was flying a Hurricane, but after just 15 minutes, a German gunner put a bullet through his fuel tank.  With his aircraft badly damaged and his hands and ankles burnt, instead of bailing out, he nursed his plane back to base.   Although landing safely, he had to be extracted from the aircraft and was taken to hospital for treatment, but died later.  He was 29 years old.   Fiske’s funeral took place on 20 August 1940, his coffin, covered in the Union Jack and Stars and Stripes was borne to Boxgrove Church and buried.

Some interesting items of trivia discovered during our research:-

At the time of the dissolution there were eight priests, one novice, twenty-eight servants and eight children living in the priory.

Several parishioners of Boxgrove were prosecuted for playing cricket in the churchyard in 1622 following concern about the safety of the church windows.

In the early 17th century the US state of Delaware was named after a later member of the de la Warrs – another Thomas West, this one the 3rd Baron de la Warr who was appointed governor-for-life and captain-general of the colony of Virginia.

The Gribble Inn and Brewery 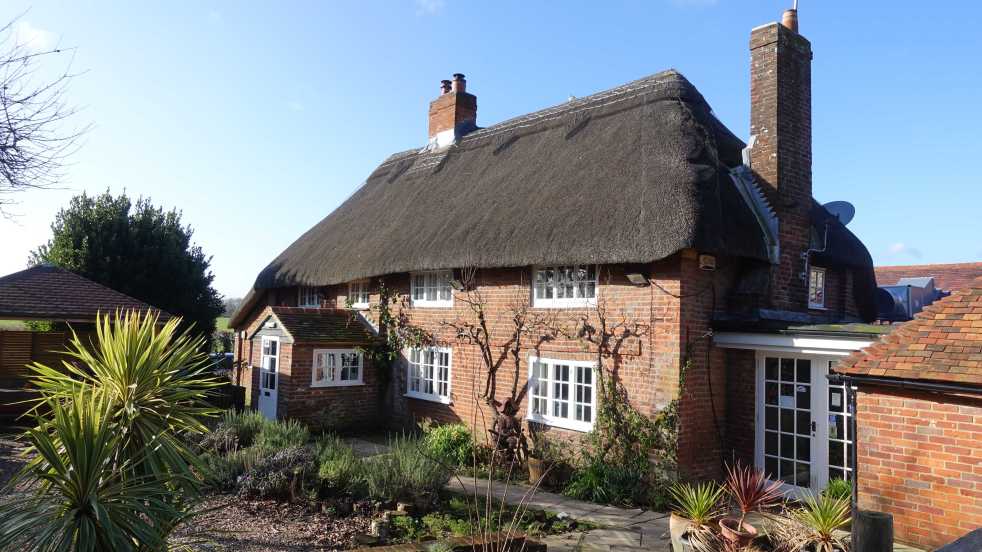 Once home to the village school teacher Rose Gribble, the cottage was bought by a local farmer after Rose passed away, and converted into a public house in 1980. The onsite microbrewery dates back to those early days. Over the years the original head brewer passed on his knowledge to his son, Rob, the current head brewer.

As soon as we entered the Gribble Inn we suspected that we were in for some quality food as virtually every table was occupied – always a good sign.  And so it proved to be.  My pan fried seabass with saffron spaghetti was an inspired creation and BQ positively relished his liver and bacon.   Bethan, our charming waitress was a delight with her combination of smooth efficiency and good humour. An excellent, thoroughly enjoyable meal.

It was quite by accident that our visit coincided with the inaugural Saturday break ordered by the Football Association, thereby freeing me from my usual occupation of viewing and reporting on the game. What a joy to journey door to door in MW’s new car rather than having to face the arduous walking that train travel entails.

Boxgrove Priory is a delight, formed by the French in 1117 AD, so there is none of my beloved Anglo-Saxon architecture to cover up or destroy, this is pure Norman and what great builders they were.  We knew it was special for as we arrived, so did the sun which had been absent so far this month.  Its rays flooded the interior and illuminated a box of jewels and particularly the astonishing painted ceiling.

I am always interested in the dedication of these churches and here was St Mary and St Blaise, the latter having a private chapel which at the time of our visit was unfortunately blocked from view.   In my youth I well remember receiving the blessing of St Blaise when two crossed candles encircled my throat, and an incantation was delivered by the priest. Peeping through the curtains I was pleased to see a pair of candles on a bench correctly crossed.  The Feast Day of Saint Blaise is February 3rd and if only we had visited the Priory a week earlier we could have enjoyed Boxgrove’s  St Blaise Fair complete with refreshments, a variety of stalls and of course Morris Dancers.  St Blaise is also the Patron Saint of wool-combers, a massive commercial venture in medieval Britain and still celebrated to this day in Norwich.

Whilst MW did his outside photography I sat contented in the sunshine and listened to the birdsong which floated round the churchyard.  Pure Bliss!  Then to The Gribble which the real ale aficionados in my local knew well, so in celebration, I drank an excellent glass of home brewed porter,  I was just beginning to think things could not be better when up turned the curried parsnip soup and the heavenly liver and bacon. Pure happiness.