The Holy Trinity Church in Privett is a quite remarkable building.  It is the first Victorian Church we have visited and, considering the size of the local community, built on an epic scale.  Indeed it has the highest steeple of any church in Hampshire.  On entering the building one cannot fail to be impressed by such a lavishly decorated church with its Italian marble mosaic floors, magnificent stonework and stained glass.   It has scarcely changed since it was erected between 1876 and 1878, financed by Sir William Nicholson, head of  the famous family of distillers.  At the time it was joked that this magnificent edifice was funded by gin and sin!  No expense was spared in the building, the internal fittings being designed and created by some of the finest craftsmen of the day.

The initial feelings of awe and admiration on entering the building turned to sadness as one realises that it is a church without a congregation.  It fell out of general use in the 1970s and is now in the care of the Churches Conservation Trust.  However, there is still an annual Carol service which attracts a huge congregation from far and wide, all wrapped in woollen rugs to keep out the cold in the cathedral like splendour.  I can certainly sympathise as, after 20 minutes photographing the interior, I had lost all feeling in the fingers.  BQ had already retreated to the car. 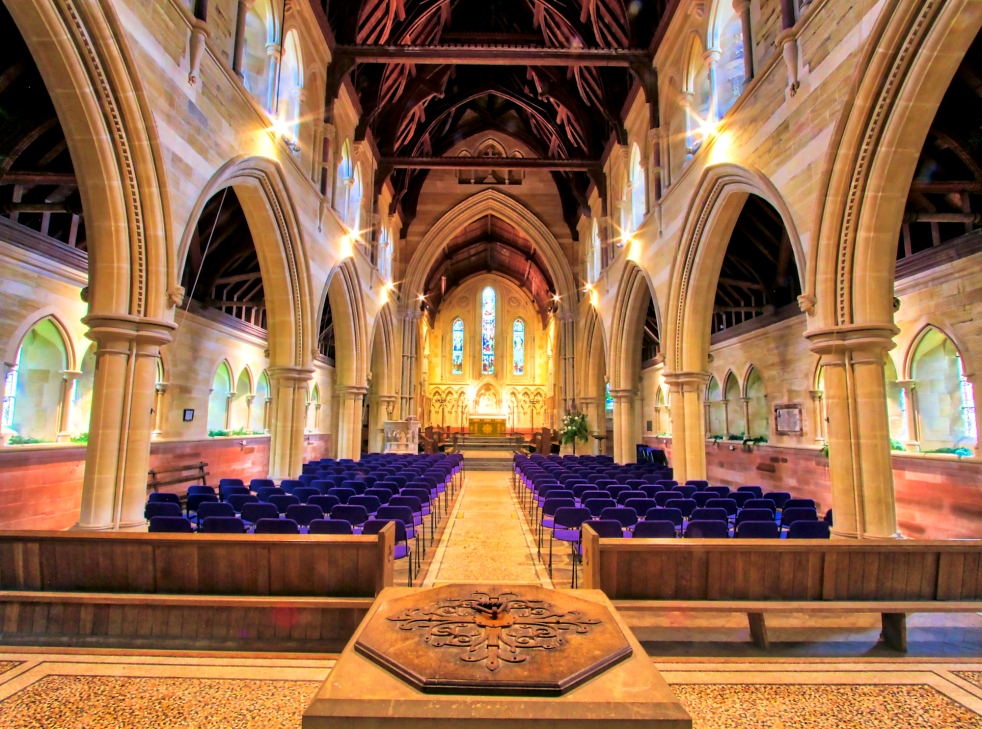 A plaque on the southern wall of the church commemorates the death of Sir William’s son, Godfrey Maule Nicholson in 1901 when he was manager of the Stratford distillery.   Godfrey had accompanied three of his workers to check on the state of a disused well in the grounds of the distillery.  A ladder was put down and one of the workers was told to put a rod to the bottom of the well. No sooner had he reported back that the water registered 11 feet deep when he suddenly fell into the water,  Godfrey Nicholson, not understanding the cause of the man’s disappearance immediately went down the ladder to his assistance, but as soon as he got a little way, he too was overcome and fell.  The foreman and one other man also attempted a rescue and were lost.  The commotion attracted the attention of nearby workers who had to be forcibly restrained from descending the ladder to help their colleagues. At a subsequent inquest info the four deaths it was determined that the rod had released a collection of deadly methane at the bottom of the water and the company was criticised for not lowering a lit candle into the well beforehand, a normal precaution.

One hundred years later, in 2001, this poignant monument named ‘helping hands’ was erected in Stratford at the site of the tragedy as a memorial to the sacrifice of those who lost their lives attempting to help others.

In 2012 the site became incorporated into the London Olympic Park

Under the benevolent influence of the Nicholson family at the nearby Basing Park Estate, the church and village flourished. The choir of 18 boys and 12 men were trained by one of the Nicholson daughters, Gertrude, and the children enjoyed the charabanc outings and Christmas parties that were a feature of village life in those days. The railway arrived at the beginning of the 20th century and Privett station was built on a grand scale with extensive yards, sheds, sidings, and 500 feet long platforms.

W.G. Nicholson died in 1942, and with his death began the demise of the Basing Park Estate. The house fell into disrepair and was pulled down in the 1960s. The land was sold off. The school closed to become a residential centre, and the vicarage, the pub, the village shop and the blacksmith are all now private houses.  The railway was closed in the 1950s. Only the great church remains, a proud reminder of earlier times. 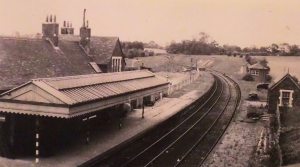 The Angel Hotel was originally named ‘The Privet Bush’ and was built in 1902 by the very same W G Nicholson to coincide with the opening of the Meon Valley Railway.  The newly constructed Privett railway station was conveniently opposite the hotel and it was hoped that the new line would bring welcome visitors to the area. A rather ornate wrought iron sign in the shape of a privet bush costing £50 was hung outside the new pub, paid for by Miss Isobel Nicholson, daughter of the owner.

As Privett station was higher than the surrounding area and the line had a downhill gradient on either direction, trains could easily make up time and it was common for the engine driver to drop in to the Privet Bush bar for a quick pint before setting off downhill at top speed to the next station. 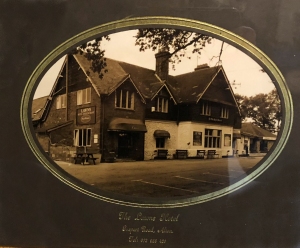 Since those early years, so full of hope, the Privet Bush seems to have had a number of reincarnations.  Later it was to become ‘The Lawns Hotel’, then ‘Ye Olde Pig and Whistle’ and now ‘The Angel’. However, despite all the past upheavals we found good hospitality and excellent pub food.  The visit was made all the more interesting by an exhibition in the dining room of photographs of the defunct Meon Valley railway.

The gloomy weather could not have been more fitting for an expedition to a vast Victorian mausoleum now a redundant church in the middle of nowhere.
The feeling was eerie and one would not have been surprised to come across Vincent Price in a long black cloak lurking between the gravestones. Well the date of our visit did coincide with the 200th anniversary of the publication of Frankenstein.
The huge structure was wreathed in mist and the famous spire, the tallest in Hampshire disappeared into the gloom. The path to the door was muddy and a sign inside the porch warned us about being locked in but, ignoring all the signs, we ventured into the interior not without some trepidation.
What a transformation greeted us when we switched the lights on, for here was magnificent beautifully decorated Victorian interior that positively glowed with warmth despite the freezing temperature.
BE WARNED HOWEVER THE LIGHTS TURN OFF AFTER 20 MINUTES AND THE GHOSTS RETURN
However the overall impression to a practicing Christian like myself was one of sadness that such a wonderful creation could be abandoned almost like a memorial of a past civilisation.
Thankfully then I was reminded of the reason for it’s existence built on the massive profits of a gin empire and perhaps to salve the conscience of of an entrepreneur who bought such misery to the poor of London. My family always referred to the drink as”mothers ruin”.
It is interesting to note that the brand has recently been revived and Nicholson gin is once again available with its distinctive “bacon and egg” coloured logo, which became the colours of the MCC when the benefactor purchased Lords cricket ground.
It is ironic that such an august institution had its beginning in product advertising.
In stark contrast the The Angel was a haven of all things welcoming and warm and we thawed out on the sumptuous armchairs before ordering lunch
Whilst perusing the board for starters, Wendy our waitress did point out that the meals were substantial, and how right she was. The single course was ample.
This was well cooked good pub food at its best, my home cured ham was as tasty as any I could remember and MW was equally enthusiastic over his chilli con carne.
We left replete and happy   BQ