Dates from the latter part of the 12th century.  This  can be confirmed as, surprisingly, the original foundation charter still survives. Permission was given by the monks of Hamble Priory to build a chapel here between 1129 and 1171 .

For much of its existence the congregation was drawn from the large number of people who depended on the nearby River Hamble for transportation and employment.  Following the ravages of the Black Death in 1391 ownership of the church was transferred from a French Monastery to Winchester College. Extensive restoration was carried out in the 19th century, but fortunately the 13th century chancel arch remains intact.

It took us a while to find our way to our destination as the satnav initially directed us to the wrong church.   Bursledon  is not a big village but there was a maze of residential streets to be negotiated before we finally arrived at St Leonards, attractively situated on a wooded hillside

A charming lady gave us a tour of the church, pointing out the special features and the vicar kindly agreed to allow the drone photo to be taken providing it could be completed in 10 minutes as a funeral was expected!

The structure was originally the Woolston Floating Bridge, a cable ferry that that crossed the River Itchen between Woolston and Southampton.  It began service in 1836 and continued until 1977 when the new Itchen Bridge opened. It was then towed to the Elephant Boatyard and converted into a restaurant.

This historic boatyard has existed for centuries and is where Henry Vlll’s fleet was built. It became known as the Elephant Boatyard following the construction of the warship HMS Elephant in 1786, chosen by Nelson as his flagship during the Battle of Copenhagen.

In the 1980’s it was the setting for the BBC  TV drama, ‘Howards Way’. This hugely popular soap opera, much derided by the critics,  was transmitted for for 5 years attracting audiences of 14 million. 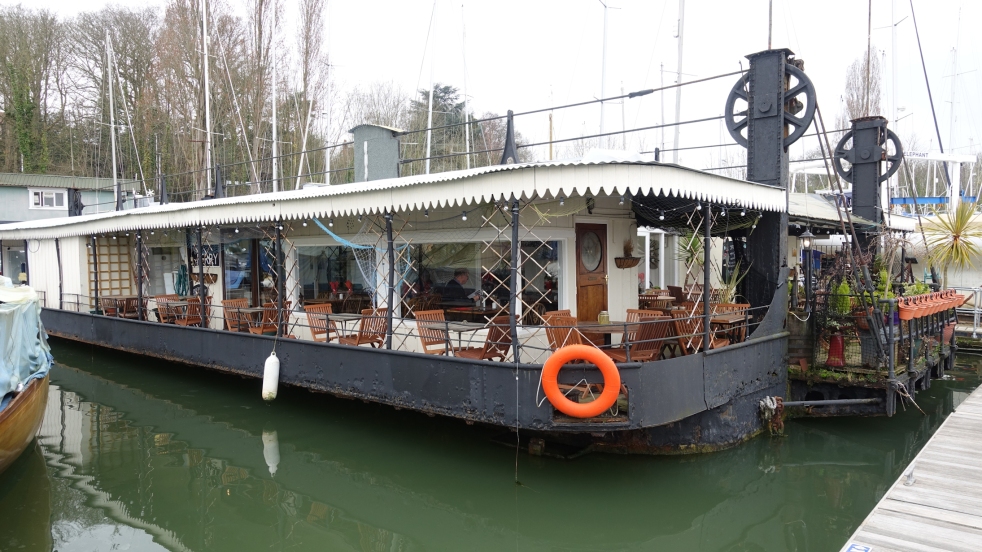 The home page photograph of us both in our salad days is apt as it shows us relaxing after a day roaming in the mountains. This would have been excellent training for a visit to this restaurant situated at the bottom of a ferocious slope but which, despite our advancing years, proved to be well worth the effort.

A varied menu and a full wine list rewarded our exertions as we dined on the deck of a disused ferry in the depth of a yacht haven.  At the conclusion of a substantial and beautifully presented meal – a warning note – the excellent traditional lunch puds (mine was bread and butter pudding) which, although delicious, weighed heavily on the long steep climb back up to the car.